I don’t think we’ve had a stupid-selfie post for a while, but here’s a good one. A woman who has not been publicly identified had her vehicle meet a chilling end when she chose to drive across a frozen river in Ottawa, Canada. As she drove across, she hit a weak spot in the ice that caused her car to crash through its surface. While onlookers were figuring out how to get her out of there safely, she climbed onto the car’s roof to shoot a selfie while it began to sink beneath her feet.

While I’ll bet it made for a great photo on her Instagram feed, I’m not sure it was the wisest of decisions. Of course, driving over a frozen lake doesn’t really indicate the possession of much wisdom in the first place.

According to CTV News Ottawa, the woman was seen speeding (for real, watch the video) across the frozen river until she hit a weak spot and the car broke through. Fortunately, the car seemed to sink relatively slowly as the woman not only had time to get out and wait for rescue but also stop for selfies on the rear end of her vehicle as it was sinking lower into the water.

Fortunately, nearby residents saw and heard what was going on and quickly rushed into action to help her. Local resident, Zachary King, saw the events unfolding and with the help of a neighbour retrieved a rope and a kayak to help safely bring her thicker ice only moments before the car was completely submerged.

So luckily one of my other neighbours, Rob Crober, had a rope that he had got, so he ran back to his place to grab one of his kayaks off his kayak rack. And I was untangling the rope, he got back, we tied the rope to the kayak and then just got it out to here.

It’s like everything worked out perfectly. Got her on the kayak, pulled her in. And as soon as we pulled her in, the car went under. Fully.

As well as the news footage from above, a number of people captured footage of the incident on their smartphones, which was then obviously posted to Twitter so the rest of the world could see what happened. 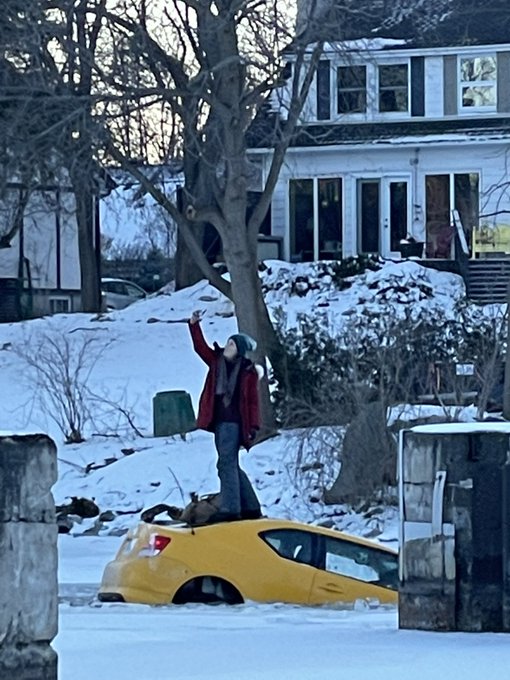 A security camera on the rear of one resident’s property captured the woman driving across the ice at around 60km/h (just under 40mph) with several oblivious children who had stopped playing hockey just watching it whiz by before meeting its chilly end a little further out of shot. 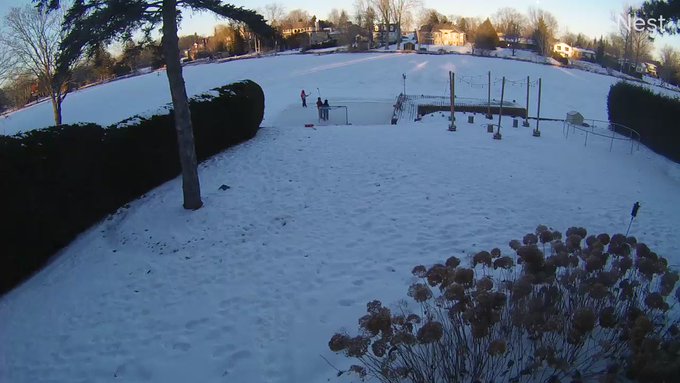 Paramedics say that the driver declined treatment at the scene and police have charged her with one count of dangerous operation of a motor vehicle under the Criminal Code of Canada. The vehicle currently remains in the river and “could pose as a hazard for curious onlookers venturing out on the ice“, the police said in a statement. Police also said that this acts as “another reminder that ‘No Ice Is Safe Ice’. Please use extreme caution this winter season“.

This evening a car went through the ice in the south end of Ottawa. Thankfully no injuries and an amazing job by local residents saving the driver by using a kayak and quick safe thinking. Another reminder that “No Ice Is Safe Ice”. Please use extreme caution this winter season! https://t.co/zpWdeyYzps

You just can’t make this stuff up. Be safe out there, folks. And be smarter than this lady!