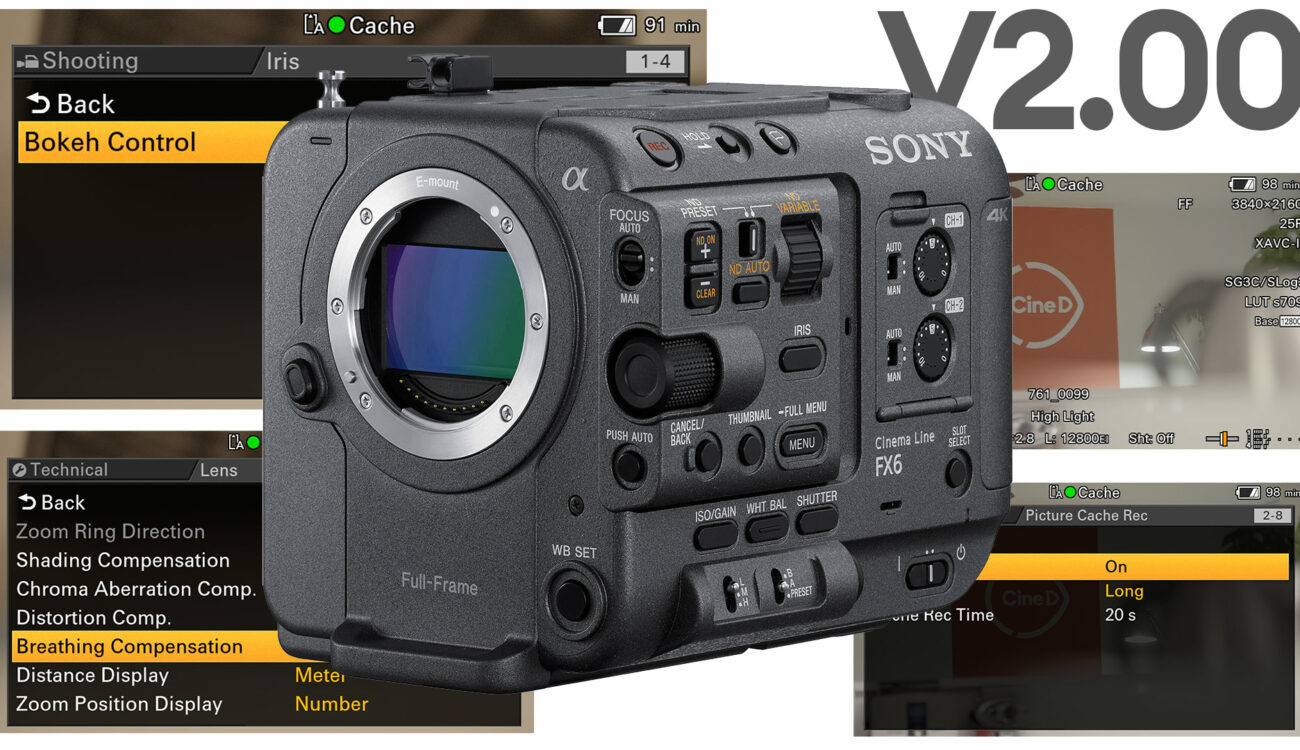 It is always a happy moment for a camera owner when his or her working tool gets new features and improvements with a free firmware update. This time, Sony shows some love to the owners/operators of the FX6 full-frame cinema camera by releasing a new free firmware update v2.00. It equips the popular camera with some features from other Sony cameras and it also introduces some brand new ones. Let’s take a look at the details.

The Sony FX6 is now over one year old. Announced in November 2020, it immediately caught a fair bit of attention with the impressive “a7S III-like” specs paired with the ergonomics of a proper yet lightweight cinema camera. Make sure to watch Nino’s FX6 review in case you’ve missed it. You can also take a look at our Sony FX6 Lab Test to get the full picture of the camera’s abilities and image quality. Today, Sony is further improving the camera with the new firmware v2.00 which adds the following.

First, the FX6 is getting an improvement in autofocus to be on par with the Sony FX3. Sony calls it “Advanced AI-based AF” and it should provide more tenacious real-time tracking to handle tricky situations when both camera and subjects are moving. Touch tracking is available in AF and MF mode. The tracking subject can be specified by touching the display or using the multi-selector on the handle.

An interesting new feature is the Bokeh control mode for easy adjustment of bokeh while minimizing exposure changes. This mode uses the built-in electronic variable ND filter and newly also gain/ISO to automatically adjust these two values when the user changes the aperture. This results in consistently exposed images where the depth of field changes. This works best when using lenses with a clickless iris ring by manually rotating the ring. We had this feature with the FS5 / FS7 II already, what’s new is that ISO is now also being adjusted seamlessly to create the illusion of an evenly exposed DOF change.

Known from the Sony Z190, the FX6 now also gets the HDR and SDR dual production for SR Live. This is a comfortable and accelerated workflow for SDR emulated preview display on the EVF and SDR gain metadata recording while keeping the HDR information in the pipeline.

Picture Cache Recording (known from the FX9) will now also be available while shooting in S&Q mode with the FX6. This feature helps to record unpredictable events as it basically constantly pre-records a certain amount of seconds. After pressing the record button, the footage will include those moments prior to pressing the button. This is actually the first time Sony unlocked this feature for S&Q mode. This mode will be available in 4 selections: short/medium/long/max which allows for a maximum of 31 seconds of pre-recording in our test of the FX6 beta firmware 2.00.

Also known from the FX3 is the 4-channel audio level meter. The FX6 will now also be able to display levels for all four channels on the OSD as well as more detailed information in the status menu.

Additional improvements of the v2.00 firmware include the following:

It is also worth noting that the Content Browser Mobile v3.5.1 is not compatible with the FX6 firmware v2.00. Sony is launching a new compatible version 3.6.0 at around the same time as the FX6 v2.00 gets released.

The firmware update v2.00 is available free of charge and will be available for download from the Sony Support Website from the end of January. The camera itself currently sells for $5,998 (body only) or $7,198 (kitted with the Sony 24-105mm lens). That is a lot of camera for the money, in my opinion.

Do you work with the Sony FX6? How do you like the new features added in firmware v2.00? Is there something else you would like to see added to the camera in the future? Let us know in the comments section below.