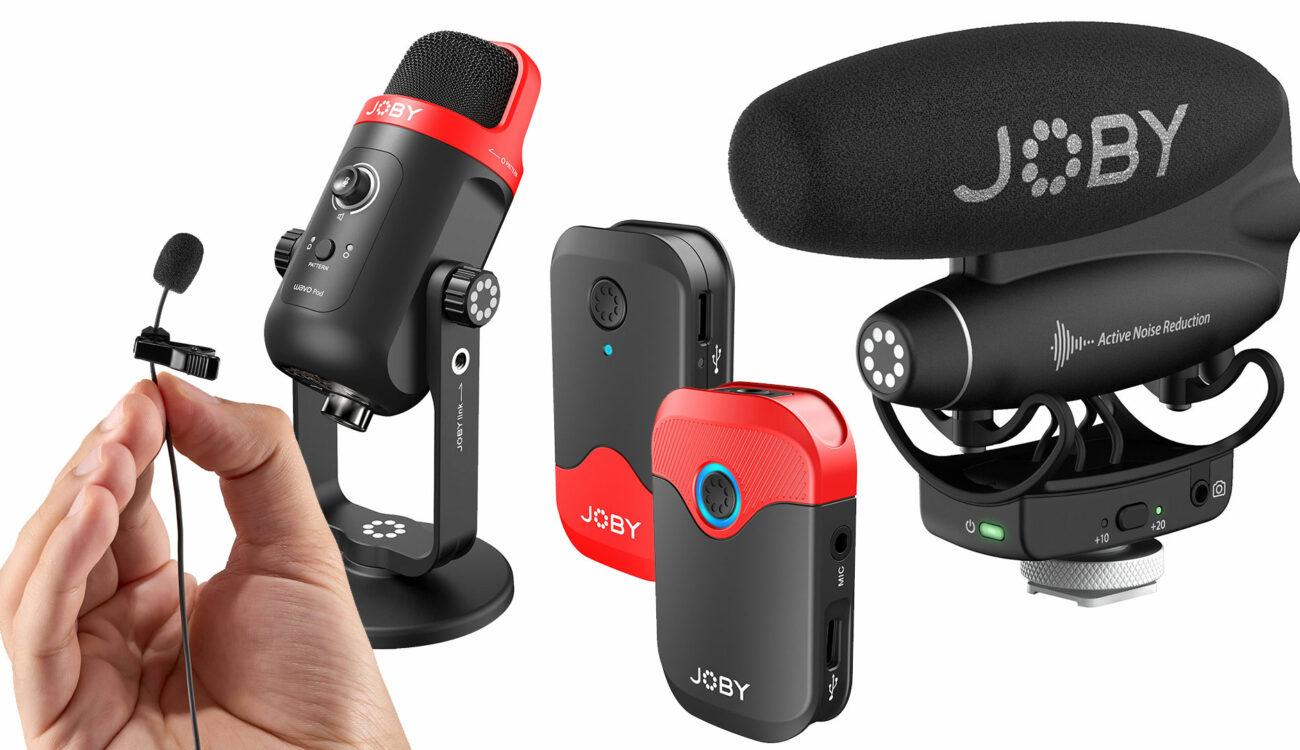 Roughly two weeks ago, we informed you about the Audix acquisition by Vitec Group. The UK-based global combine obviously wants to venture more into the market of audio products. The recent announcement from JOBY (the creator of the all-purpose tripod called Gorillapod, since 2017 a part of Vitec Group) only confirms this trend. JOBY just announced new microphones to their range:

While the first small JOBY Wavo microphone has been on the market for nearly two years now, JOBY now expands the line significantly. The company will also be offering a handful of accessories and pre-defined sets for these products. Let’s take a closer look at the new JOBY Wavo line products.

The first product of the new JOBY Wavo line, which is also getting the most hype, is the on-camera microphone Wavo PRO. Being a super-cardioid mic it has a highly directional polar pattern. Perhaps the most interesting feature is its active noise reduction (ANR) that can clean up bumps in sound from walking or camera movement.

The Wavo PRO microphone uses a built-in rechargeable battery which can keep it running for around 60 hours (50 hours with the ANR turned on) according to JOBY. Alternatively, the microphone can be powered via the USB connection from a power bank or laptop.

The company also created the JOBY Wavo app (available for both Android and iOS) which can be used to control multiple aspects of the audio pick-up such as gain, pads, filters, and parametric EQ. In the app, users can also activate the -10dB safety track recording. The microphone connects to the app via Bluetooth 5.0.

The company also designed a simplified and more affordable version of the microphone called JOBY Wavo PRO DS. It has most of the features of the Wavo PRO, but lacks active noise reduction, digital app-based sound management, and external secondary mic input.

The mic’s Rycote Lyre shock mount absorbs vibration from stand/pole/camera handling. In addition to the 3.5mm TRS camera cable, the Wavo PRO is supplied with a USB Type-C cable for charging and computer connectivity, a foam windscreen that reduces “rustling” noise from light wind, and a furry windshield for outdoor wind protection.

The second new microphone from JOBY is the omnidirectional lapel microphone. The JOBY Wavo Lav PRO can be plugged directly into the Wavo PRO mic input or to any wireless system utilizing a 3.5mm TRS connection. The 8.2′ long mic cable has been designed to reduce handling noise. The Wavo Lav PRO comes with a foam windscreen and a shirt clamp.

The Wavo AIR is a new 2-person wireless microphone system – much like the DJI Mic, the RØDE Wireless GO II, or any other. The transmitters (TX) can accept any lapel microphone via the 3.5mm TRS input or they can use the built-in omnidirectional microphone directly.

Both the transmitters and the receiver (RX) offer built-in batteries for up to 6 hours of operation and they can alternatively be powered via the USB-C ports. The wireless system operates in the 2.4 GHz spectrum (away from VHF/UHF wireless systems) and should work up to a distance of 164′ (line-of-sight). It uses 18 channels with auto-scanning to automatically avoid interferences. JOBY claims that there can be up to five simultaneous systems (10 mics maximum) in one environment.

Every Wavo AIR set comes with two TX units, one RX unit, two lavalier mics, outdoor and indoor wind protection, and both TRS and TRRS audio cables to connect the RX unit with the camera or phone. The Wavo AIR features a proprietary mounting system. There are a few mounts already included in the set plus you can purchase an optional expansion kit that includes additional types of mounts.

The Wavo POD is a large-diaphragm desktop USB microphone for solo podcasting, streaming, and content creation. The mic is designed to offer easy-to-use volume controls and a good sound right out of the box. The Wavo POD features interchangeable polar patterns – cardioid for directional pick-up or omni that captures sound all around the mic.

It is possible to monitor audio with the built-in headphone jack. A pop filter is included, and you can also buy a second pop filter to have protection on both sides when using the Wavo POD in Omni mode for interviews for example.

The desk stand is removable so it can be fitted to tripod support. The microphone body is compatible with both 3/8″ and 5/8″ threads with the included adapter. There are also further 1/4″-20 mounts on the side that can hold additional accessories.

All the new JOBY Wavo products are available right now. The prices have been set as follows:

What do you think about the new Wavo microphones from JOBY? Which on-camera microphone are you currently using?