WiFi vs Ethernet for Online Gaming/eSports (Wired vs Wireless)

Is Wired Internet Really That Much Better, Faster and More Stable Than Wireless?

When it comes to the debate of WiFi vs Ethernet for online gaming, you’ll probably already have a pretty strong incline as to what we’re going to say in this guide. Yes, simply put, an internet connection via a wired Ethernet cable (in other words, LAN, which stands for Local Area Connection) is always going to be the most ideal internet setup as an avid or serious gamer. But the question remains; is Ethernet really that much better than wireless for gaming in this day and age? Let’s discuss objectively (as always), so that you can make the right choice for your particular gaming network setup.

WiFi technology has indeed come a long way, with many reiterations and improvements over the years, and the truth is that if you have a good internet connection, you invest in a good-quality router, and you set things up in your home/gaming lair correctly – you likely will not see much of a difference compared to a standard wired Ethernet cable connection in terms of overall speed.

See Also: The Best Routers for Gaming and Streaming

WiFi technology has indeed come a long way, with many reiterations and improvements over the years, and the truth is that if you have a good internet connection, you invest in a good-quality router, and you set things up in your home/gaming lair correctly – you likely will not see much of a difference compared to a standard wired Ethernet cable connection in terms of overall speed.

However, getting to the point of a flawless wireless setup isn’t always easy let alone possible for some people. You may not be able to afford the best router, your home may have a ton of interference, and you may live in an area with a less than desirable internet connection for whatever reason. 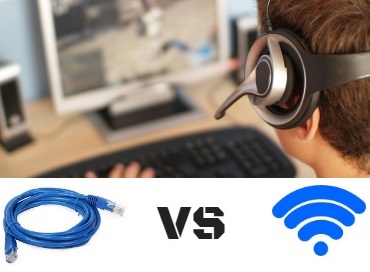 Plus, speed isn’t really the issue at play here when you want to compare WiFi vs Ethernet for the best online gaming experience. What’s more important is the stability of your connection and network interference from things like doors/wall/objects and other devices. That’s why when you ask any seasoned gamer whether to use WiFi or Ethernet for online gaming they’ll matter-of-factly mutter something along the lines of wired winning hands-down.

But like I said, that doesn’t mean that wireless can’t be as good, as fast, or even as reliable/stable, however that’s IF and only IF you manage to get a great wireless setup with the best equipment and are lucky enough to avoid interference. Even with a very good WiFi router and overall setup, I would still very much favor a wired setup for online gaming, because there’s just no way that wireless is going to match an Ethernet cable stability-wise 100% of the time.

Maybe in 2028 wireless will be as stable as wired, but for now, even though wireless CAN be great and is completely recommended for other uses, when it comes to avid gamers, aspiring eSports pros, or gaming streamers who want (or should I say NEED) the absolute fastest, reliable online connection with minimal  interference and latency/lag you’ll want to do everything you can to plug in with a good old Ethernet cable (no matter how long it has to be to reach your gaming desktop..you can buy really long Ethernet cables if you need).

Even minute interference or a little extra latency on a wireless network can get in the way of flawless online play and could mean the difference between fun and frustration or winning and losing. In competitive, fast-paced games every millisecond adds up.

If you’re going to ignore this advice and game online with WiFi anyway, which may not let you down if you’re simply a casual gamer, make sure to pick a good router and place it as close to your gaming PC as possible. Also, you’ll want to get a recent 5GHz WiFi router, and ideally one that can also prioritize your online gaming sessions over other internet traffic.

So what’s best for gaming? Ethernet vs WiFi? The answer is clear, at least for the foreseeable future. This line from good-old PC Gamer pretty much sums it up:

“You would have to pry a diehard gamers wired connection from the grasp of their cold, dead hand. Capiche?”

The retailers I recommend most, for the regions that make up the majority of my readers.

Disclosure: As an Amazon Associate we earn from qualifying purchases. We may also earn a commission on sales made through other store links (Best Buy, B&H, PLE, and OCUK).

VPNs are fast becoming must-have software these days to improve the security and privacy of your PC when online. There’s lots of VPNs but NordVPN is objectively one of the best and the one I use. VPNs also help for online gaming as explained here.

Indie game programmer currently working on my first official game release (after years of hobby projects), an atmospheric story-driven VR FPS built with Unreal Engine to be announced once I’m ready here and here (for anyone into VR FPS’s). Also likes writing about tech, which helps to fund development of the game.

My favs of all time are OOT, Perfect Dark, MGS1 and 2, GE007, DKC2, THPS3, HL1, WC3, Vice City, and KOTOR, with the most recent addition to my list of immortals being the VR masterpiece Half Life Alyx. If you want help with a new build or upgrade feel free to ask on the main PC builds guide. I try to respond to every comment. – Julz