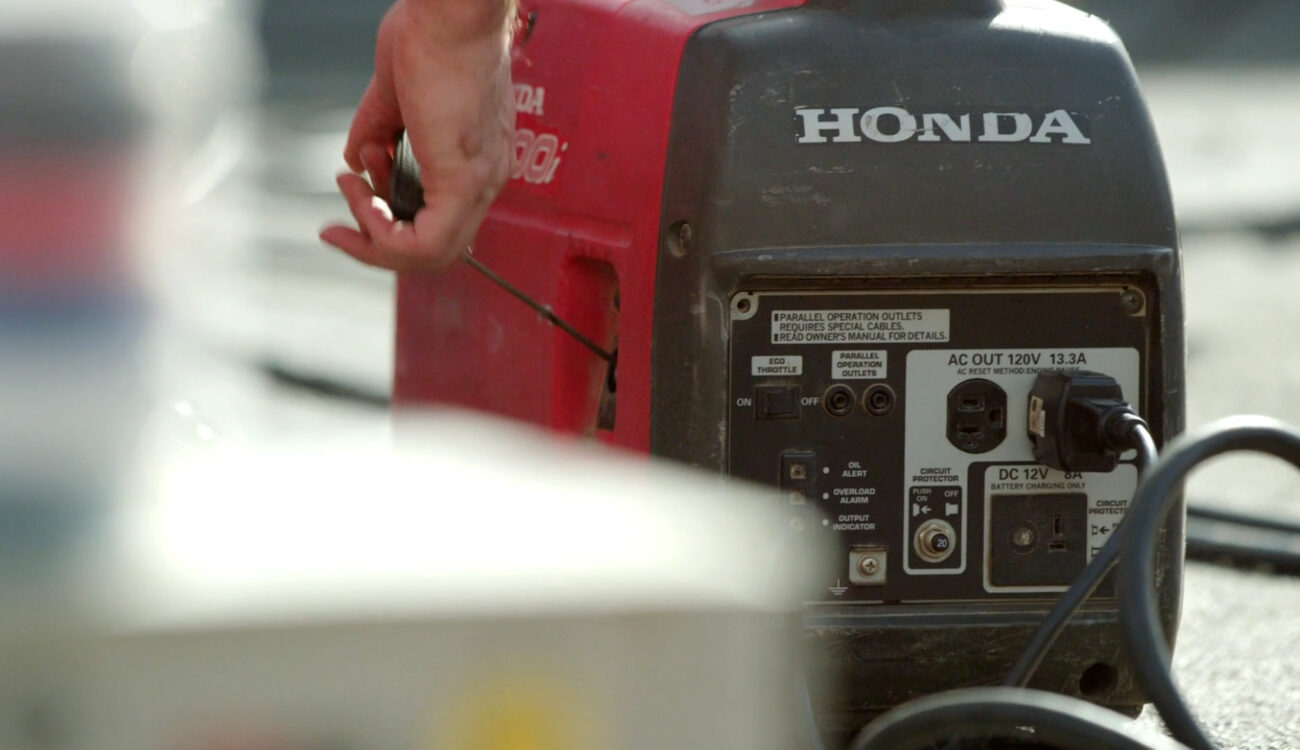 Portable power generators – or “gennies” – are integral to most film and video productions. And in our industry, Honda generators are without a doubt the gold standard. But if you haven’t used one before, you’ll want to brush up on the basics first.

Chances are that sometime in your career or hobby you’ll be tasked with powering lights or other equipment in the field, and your only source of electricity is portable power.

V-lock or Anton Bauer batteries can get you only so far, and portable battery power stations are still very limited (more on them below). So gas-powered Honda generators can become your best friend.

In the Power Distribution lesson of Shane Hurlbut’s Cinematography: Mastering the Image course on MZed, you’ll learn all about how to safely use Honda generators, along with a treasure trove of important advice on working with electricity on set. The lesson is over an hour and should be standard viewing for any filmmaker, but in this article let’s focus on portable generators.

When to use Honda Generators

In the Power Distribution lesson, Shane describes several key moments in his 25-year career where he relied on Honda generators. For example, while filming Need For Speed, Shane would position a string of generators attached to lights along a five-mile stretch of road.

The crew could lock up the generators each night to a lamp pole, and then each day when they were ready to start shooting, they could go along and turn on each generator and have lights ready to go.

In another example, Shane explains how he would tie down small Honda generators to the hood of a car, to power attached lights while shooting a driving scene. In that situation, the fuel would slosh away from the fuel pump every time the driver hit the brakes, so Shane devised a way to angle the generators so they wouldn’t cut power every time the car came to a sudden stop.

But you don’t have to invent really creative uses for Honda generators on a film or video production. There are countless other situations where it’s better to use a few generators to power lights, rather than running long extension cables or “stingers.” All you need is some fuel and you have an unlimited power source anywhere you go.

Which Honda generator should you use?

There are a lot of options in the lineup of modern Honda generators, and they’re all broken down into the maximum watts they can output consistently. In the Cinematography: Mastering the Image course, Shane demonstrates the 2000, 3000, and the big 6500 Honda generator.

How do you know which one will suit your needs? First, you take a look at the wattage of the light or group of lights you want to use, and then you want to choose a generator that has about 20% more output than you’ll actually need. That’s because unlike power coming from the power grid, which has a consistent flow, generators have small fluctuations in power delivery and you don’t want to be constantly at or near the maximum draw.

Even though most Honda generators have advanced inverters that stabilize the power output with clean signals or sine waves, you still want to give yourself a bit of a buffer. Shane advises that for a Honda EU300is, it can safely handle around 2400 watts before it starts to get unpredictable. So one ARRI M18 with an 1800 bulb would work, but two would kill it. But you could pair one M18 and another with the 1200W bulb and it would work on the Honda 3000.

With the small Honda 2000, Shane says he used over 30 of them on Need for Speed, connected to Sodium Vapor or Metal Halides. They would each take 200, 400, or 1000 watts, outputting bright light but without the color balance that an HMI demands. On “Fathers and Daughters,” he would use several Honda 2000 generators with little Dedo lights to create bokeh pops in the background of night scenes.

How to use Honda generators

To use a Honda generator on a film production is fairly straightforward, but here are some tips that may help you if you’ve never used one before.

First, you want to fill it up with fuel before you get started, and you want to use high octane fuel, at least 91 octanes. There are some gas stations that offer ethanol-free fuel, which is even better for helping a generator motor run efficiently, especially if you leave fuel in the tank for months at a time in between use.

To start a generator, you want to turn the fuel pump on first, and then start the motor. Some generators have a choke, so you’ll need to first push the choke in to start the motor, let it run for a few seconds or longer if you’re starting a cold motor, and then pull the choke out. If the starter battery is dead, you can use the recoil or pull start to get the generator going. And make sure to turn the Eco mode off – for filmmaking purposes you don’t want the generator to change the output mid-shoot.

Also, keep in mind that the initial strike to power up a light consumes the most amount of power. So when powering multiple lights, space out your strikes. And some generators have anti-tip protection, so if it’s tipped too far at an angle, it’ll turn off automatically.

It may seem obvious but any generator you use will be pretty loud for film production use, no matter how silent it’s advertised. So make sure to keep it far away from mics.

And if you’re using a heavy-duty generator like the Honda 6500 with multiple HMI lights and distro boxes and stingers, you’ll need to ensure a balanced load which may require a ghost load. It’s quite complicated and I recommend watching Shane’s full lesson on power distribution to take it all in.

The lesson goes into a ton more details about running power from a household breaker box, differences in countries and continents, common names, and etiquette for labeling everything. There are all sorts of industry terminology that you’ll want to become familiar with, like distro boxes, gang boxes, banded cables, bates, snake bites, threefers, cable coloring schemes, and much, much more.

But perhaps the most important tip of all is never kneel down when you’re working with electricity. If there’s an issue when you make a power connection, the electricity will go through your arm, to your heart, and then through your knee to the ground. So always, always make sure to squat instead of kneeling down. Have both soles of your shoes on the ground and squat down. You may want to google the “slav squat” to fully master the technique.

One thing that’s not covered in the course that is becoming more and more commonplace on video shoots is the portable battery station, like a Yeti or Jackery. Can you use one on a video production and skip a fuel-based generator?

The difference with portable battery stations is they only have a limited amount of power before the battery is depleted, and then it takes hours to recharge them. Whereas with a standard Honda generator you can simply add more fuel.

If all the power output and capacity terms start to get a little confusing, here’s an easy way to think about it. Imagine your battery is a water pump, where the voltage is the amount of pressure, the amps is the speed of the water pumping due to the width of the water pipe, and watts is the total amount of water received consistently at the end. Volts x Amps = Watts.

And to determine the runtime for the battery, the Watt-hours or Amp-hours is simply how many hours you’ll get before the battery runs out. Mah is milliamps, so some small batteries that are 20,000 mAH have 20 Amp-hours when they’re receiving their max Voltage.

So for big powerful lights, battery power stations are just not going to cut it. But there’s certainly a use for small LED lights that draw less power. For example, I recently bought two Aputure 200D lights that each draw 250W at their max output. I’ve connected both of them to my Jackery 1000, which offers a maximum output of 1000W and has 1000 Watt-hours of capacity.

In my testing, both lights on at full power lasted for 1 hour and 45 minutes before the Jackery powered off, so a little less than the expected full two hours. But that’s good to know since these COB lights don’t have a built-in battery power plate. I can use the Jackery 1000 to run them for a standard interview at 50-75% output for two hours.

There are many essential lessons to learning how to safely light and direct films in the Cinematography: Mastering the Image course. If you want to improve your power, light, and block actors on a production, this course will give you the knowledge and tools to get there.

As an MZed Pro member, you get access to this course as well as everything else on the platform, plus we’re constantly adding more courses. For just $30/month (billed annually at $349), here’s everything you’ll get:

What are your best tips for posing women in photography? Let us know in the comments below!