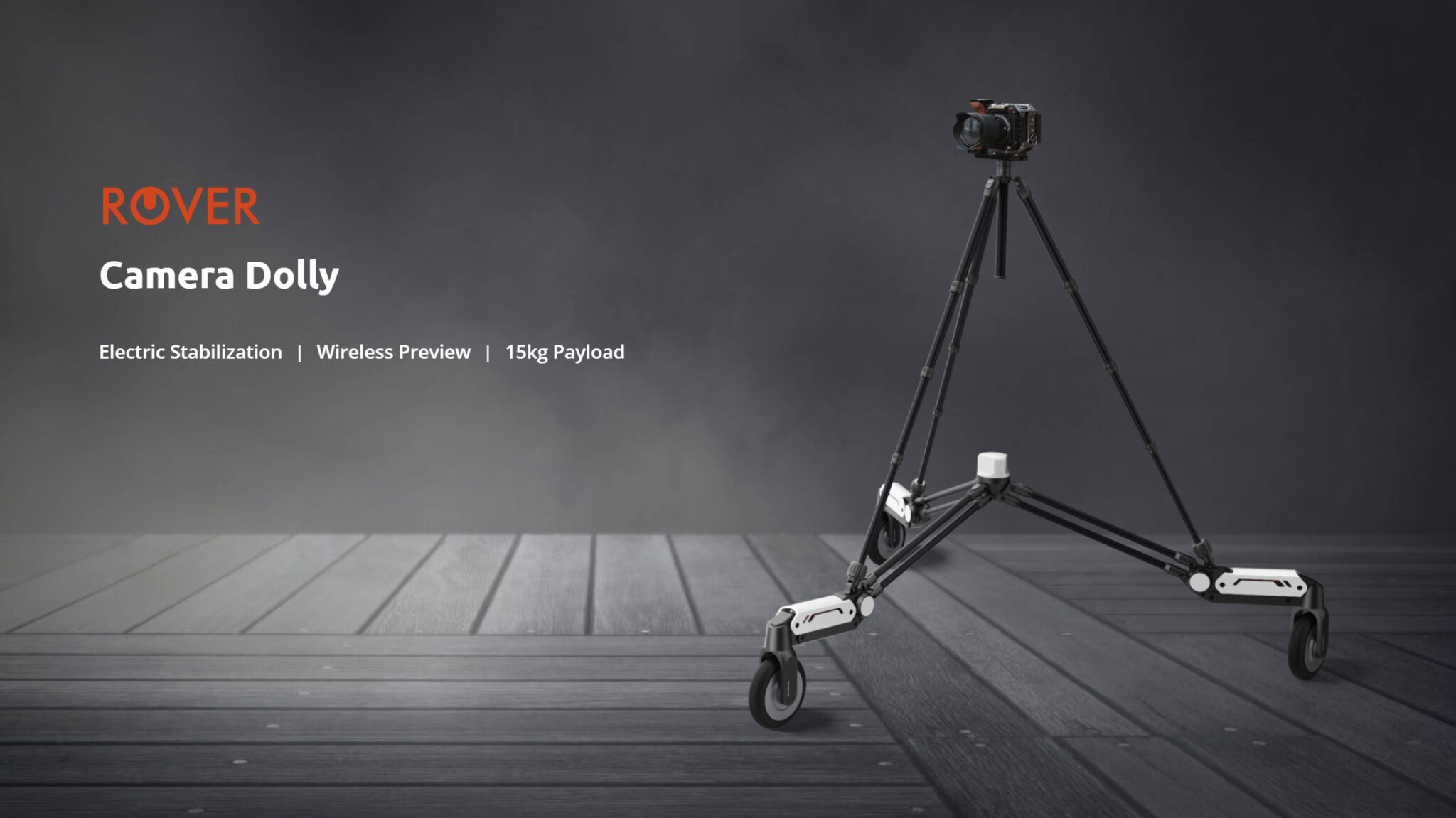 This is a pretty interesting idea from Snoppa Tech. It’s called the Snoppa Rover and it essentially seems to be a motorised tripod on wheels. According to Snoppa, you can programme it with set paths with full camera control, it can climb up to a 30° slope, it has a 0° turning circle, runs on all terrains and features smart tracking, so you don’t even need a camera op to follow you around. But what’s most impressive is the stabilisation.

Each of the three weeks on the Snoppa Rover has independent suspension and there’s a gyroscopic sensor in each one, along with a hall sensor and accelerometer. These detect any changes in the rover’s body as it moves over terrain and can respond by adjusting the wheel to compensate ensuring as smooth a ride as possible. You don’t even need to mount a gimbal on top!

It looks as though the Snoppa Rover might still be in the prototype stages at the moment, although it seems to have come along quite far and the videos they’ve posted to their YouTube channel do look quite good. According to the current specs on the Snoppa website, it can handle loads up to 15kg and can reach speeds of up to 30km/h (18.6mph) on those 210mm diameter wheels. And those wheels allow for a bunch of different camera moves.

And as well as the modes above, there’s also Smart Object Tracking, which allows you to track a person or other moving object such as a vehicle. They say that the process is entirely automated and that “you don’t need another crewmember to operate. You can leave it to Rover to perform the tracking while saving manpower”. And it can do all this while negotiating potentially rough or bumpy terrain.

The Snoppa Rover offers three different methods of control. You can use an app that supports both iOS and Android devices, you can use a regular RC Remote Control (they specifically show the Futaba T18SZ, although I suspect you could use pretty much any standard Tx/Rx combo), or you can use a dedicated handle designed specifically for use with the Rover for up-close-and-personal direct control of the movement.

Naturally, you can shoot video with this thing, but you’re also able to shoot timelapse, too. For hyperlapse shooters that are regularly moving, shooting, moving, shooting, rinse, repeat for a few hundred shots at a time, this should make the process go much more smoothly, accurately and not least of all quickly! It also features a “Time Reversal”, allowing you to quickly and easily repeat moves where necessary without having to start figuring out your moves over again from scratch.

Construction is largely aluminium alloy and high strength carbon fibre, which they say is built to be “competent in a variety of harsh outdoor environments”. I’d love to put that to the test through some of Scotland’s wilderness, but I expect the Snoppa Rover will be out of my budget (just checked the price and yup!). As far as connectivity, you’ve got an HDMI port for DSLR/Mirrorless as well as an SDI socket for your higher-end cinema cameras. Camera control is provided via Type-C USB and there’s an extension port “for universal remote control”.

It’s powered by two battery packs that operate in parallel to increase battery capacity. This means that they’re also hot-swappable and if one dies, you can switch it out for a fresh one even while it’s in the middle of doing its thing without losing power. It also means that each battery falls within airline limitations on individual battery capacity. There’s no word on what the capacity of the batteries is, though, nor how long they last or take to charge, but they do have a Type-C USB “fast charging” port. Whether or not that’s USB-PD or something else is unknown. And if it is USB-PD, the maximum wattage it will support is also unknown.

It’s a very cool device in principle and offers a lot of potential for filmmakers and hyperlapse shooters. I’m very keen to see how well it performs in the real world. We might have a bit of a wait before that happens, though. It’s not available to buy just yet and while they have announced that there’ll be a “launch day”, they haven’t said when that is. They also haven’t said whether it’ll just go straight up for pre-order or whether they’re going the crowdfunding route.

But what they have said is that the regular retail price for the Snoppa Rover will be $3,599 and there’ll be a special launch day price of $2,399. But, again, they haven’t said when that day is. You’ll have to sign up to their mailing list to be notified. You can find out more about Snoppa Rover on their website.