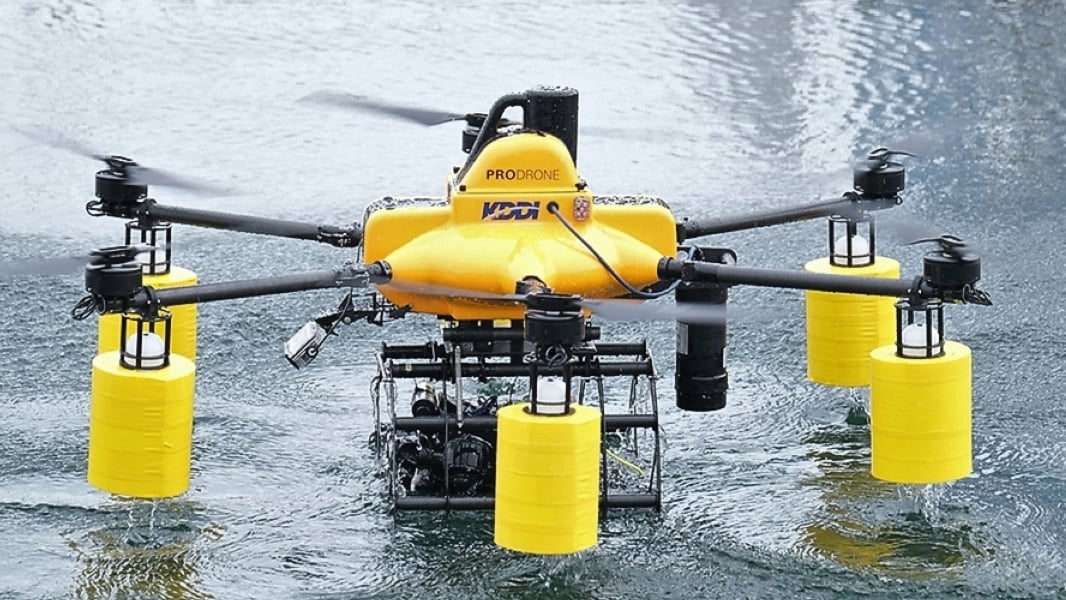 For as long as aerial drones have been a thing, we’ve seen people try to use them around water. Typically, it’s either landing on water or taking off from water with “floating landing gear“. We’ve even seen drones that can both fly and sort of swim (more bobbing up and down, really) underwater, as well as drones that don’t fly but are dedicated to underwater use.

Well, now, a new drone developed as a collaboration between Japanese telecommunications company KDDI, commercial drone manufacturer PRODRONE and underwater robotics company QYSEA which takes the best of both worlds and marries them together. It’s called the “Sea-Air Integrated Drone” that can both fly in the air and unleash an underwater drone payload once it’s landed on a body of water.

It’s a fascinating concept that QYSEA says has been in development for the past six years since initially thought up by the folks at KDDI to offer advanced long-range communications with drones. It’s the world’s first drone of its type and QYSEA says it offers seamless operation from land, air and sea. Those long-range communications allow it to fly out to a preset point at sea and once it lands, the “FIFISH ROV” (that’s the name of the underwater bit developed by QYSEA) is released from its cage and allowed to sink down to the depths while the aerial section acts as its antenna to allow communication to the world (water isn’t great for letting radio waves pass through).

It’s designed primarily for industrial and inspection use – for example, at an offshore wind farm – to check the status of underwater components and maintenance work. Other applications could potentially include checking over the hull of boats without having to remove them from the water, as well as aiding in search and recovery, seeking out long lost wrecked ships, planes and other items that don’t really belong underwater.

And it can do all this while the operator stands in the relative comfort of dry land. Well, I suppose you could launch it from a boat, too. In fact, I can see these (or something similar) becoming standard tackle on many ships out there (particularly military and cruise liners) for easier hull inspection whilst still out in the field… uh, ocean.

The exact range of the drone hasn’t been announced, but given the suggested use cases for such a drone, I expect it’ll be significantly more than we’d get with something like a DJI Mavic or even an Inspire. No price has been announced for the new Sea-Air Integrated Drone, either, which suggests that if you have to ask, you can’t afford it. And there’s been no mention of an actual release date yet, although I imagine the target market for this kind of device will be in direct communications with the manufacturers and they’ll be built on an as-ordered basis, rather than lining the shelves of B&H and Amazon warehouses around the world.

The cost for those early adopters will likely be in the multiple thousands (possibly multiple tens of thousands), but as the technology and general concept become more proven, I think we might perhaps start seeing hobbyist and lower-end commercial versions of the same idea for tourists, photographers and filmmakers coming in the next few years. I don’t expect those will be inexpensive initially, either.

PUBG Mobile 1.8 update - what it contains and changes