People waited a long time for Sony to replace its ageing A7S II body. It finally came mid-2020 in the form of the not surprisingly named Sony A7S III. And despite being no slouch at stills, its video capabilities were its big selling point. It lacked the 8K capabilities of the Canon EOS R5 and it can’t record internal raw video, but it does offer the core of features that many Sony video shooters want.

Last year, we saw the release of the Sony A7 IV, the successor to the popular Sony A7 III. It, too, brought some very impressive video features with it and it offers some distinct advantages over the A7S III when it comes to shooting stills, but how do the two stand up when shooting video is your primary need? Well, in this in-depth comparison video, Caleb Pike answers exactly that question.

Caleb covers a number of differences between the two cameras, starting with their physical differences. The A7 IV has a slightly deeper body that’s easier to grip handheld, the flippy out LCD is a little easier to open due to the position from which you pull it. The A7S III has a higher resolution LCD and a larger and higher resolution EVF, though. The A7S III also has dual SD/CFexpress Type A slots, whereas the A7 IV has only one dual-format slot and a microSD card slot.

Most of the physical changes between the two won’t make that much difference to those who wish to shoot video. They’ll typically be mounted on a tripod, gimbal or slider. Or they’ll be in a cage rig with an external monitor (possibly a monitor/recorder) on top, follow focus unit and all the rest of it. And once they’re set up, the goal is to just be able to turn them on, hit record and go. 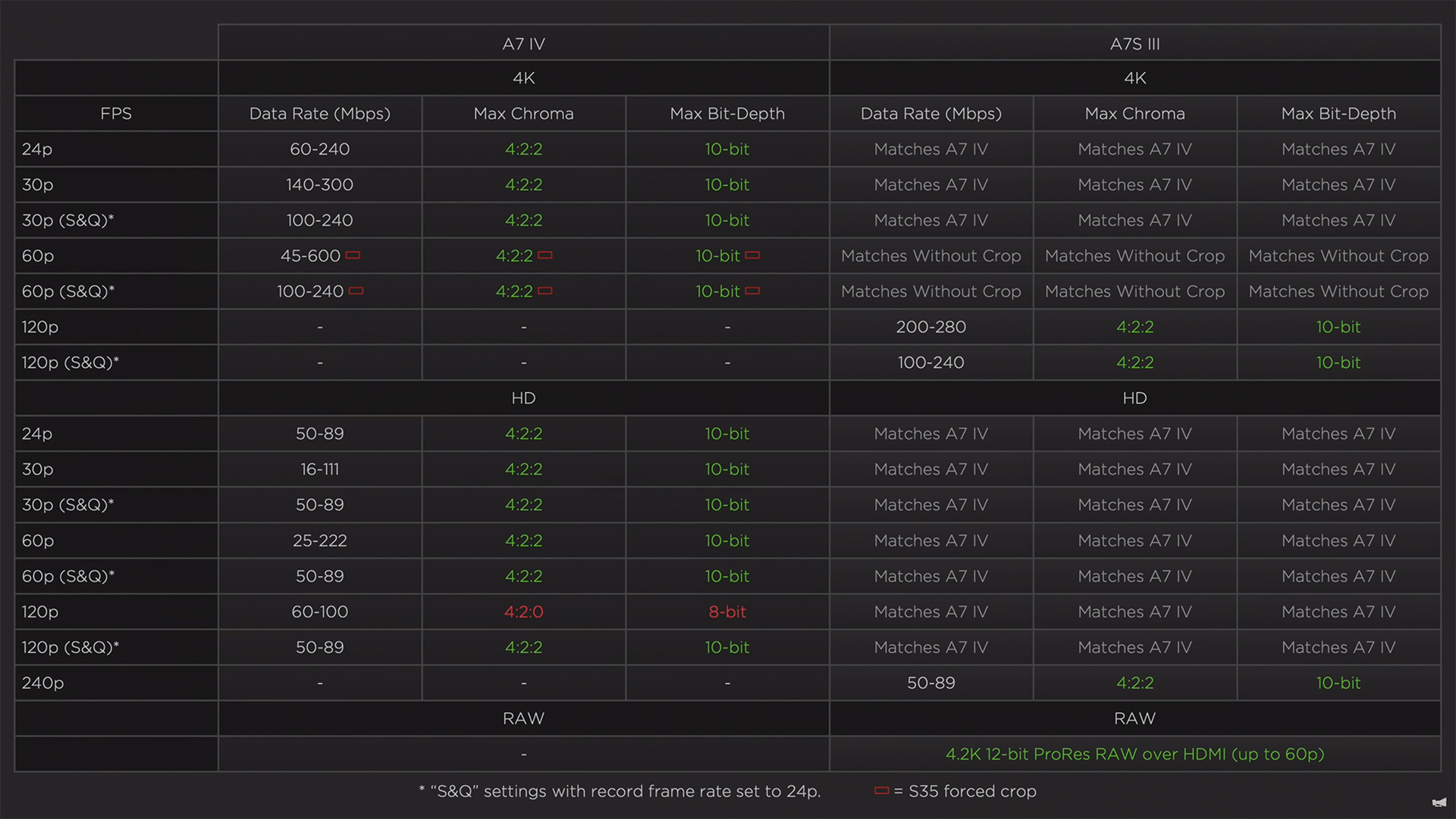 When it comes to codecs and formats – which are much more important to video shooters – they’re both fairly evenly matched. Of course, the Sony A7S III offers a few modes that the A7 IV doesn’t, like 4K 120fps and 1080p 240fps. The A7S III also provides 4.2K 12-Bit Raw over HDMI at up to 60fps for recording to something like an Atomos Ninja V.

There are some obvious differences when it comes to the size of the sensor and crop factors for various formats, but these might be considered more of a personal preference based on needs than a “better” or “worse” comparison. There are some interesting differences with the ISO, too. The A7S III will let you go higher, although the A7 IV seems to keep up in terms of quality with the A7S III through the ISO range it does support despite (or as a result of – as Caleb explains) having a much higher resolution sensor with smaller photosites.

But those aren’t the only metrics by which we judge cameras. Especially not for such a task as shooting video, where you might often need to shoot and match multiple cameras in the edit and have the look between them be seamless. Colour accuracy, rolling shutter, dynamic range, shadow detail and many other metrics are also factors in why one might choose to purchase one or the other. And even if one aspect is objectively “better” in a certain way than the other, it might not make a difference if the other already fits your needs.

But Caleb talks about all of these aspects of the camera and more in the video. So, if you’re still on the fence about whether you want the Sony A7 IV or the A7S III, it’s worth having a watch. It might just answer your questions!