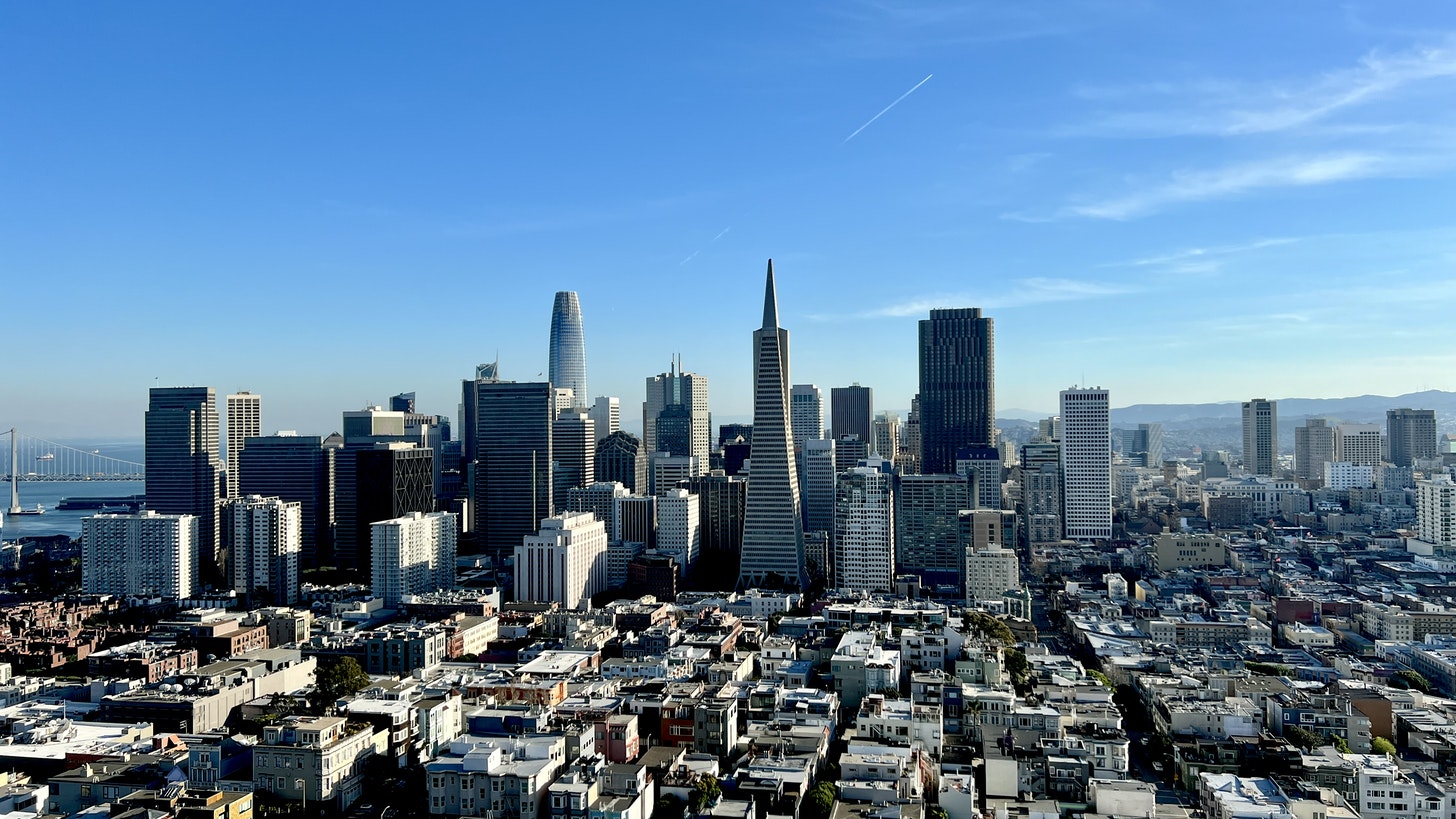 But it happens to be the most photogenic, IMHO, with more photo eye candy per square mile than its competitors.

As many readers know, I’ve been talking recently here about the wave of camera thefts in the city, so I recently returned to San Francisco, left my big Sony camera at home, and ran around the city with just an iPhone 13 Pro and tiny GoPro camera to photograph the 10 greatest hits photos of the city.

Smartphones are harder to steal! And they can be turned into bricks after thefts. So let’s run down the hits.

We obviously start with the cable car, and everyone loves the shot of the car coming up the hill, with Alcatraz Island in the background, like on the old Rice a Roni TV commercial. Where to get that one? On the corner of Hyde and Chestnut. The other classic shot is the cable car coming up California Street, with the Bay Bridge behind it. That’s on California and Mason, near the Fairmont Hotel.

The best time for these shots are early in the morning, before the streets get too crowded. On a foggy day, however, it’s whenever the skies clear, as you’ll want to see the island and bridge in the background. Lens choice: the telephoto lens on your smartphone will make the cable car seem larger, and the background closer. The wide shot will give you more of San Francisco in the background. My suggestion: shoot both. Cable cars go up and down the street every few minutes. Have more options by shooting more.

There are many, many places to get a great shot of the iconic bridge, from Crissy Field or Fort Mason, looking up at the bridge, but my favorite is going across the bridge, to the Marin headlands and looking down at the bridge and city from there. Pro tip: Use your wide lens to get in the expanse of the bridge, and move your body to eliminate as much of the foreground as possible. Timing wise, sunsets are awesome, but a sunny day with sol beaming down on those red beams of the bridge are pretty cool too.

That row of cute victorian homes, as seen on the opening credits of the Full House TV show is an easy stop, just off Alamo Square, at the corner of Hayes and Steiner. For the best shot of the homes, climb to the top of the park, and look downward. Mid-day looks great, to see the color in the homes.

A symbol of the city since 1933 offers great, 360 degree views from the parking lot, and an even better one from the observation tower. You’ll have to pay a fee to get in, but it’s worth it. A bonus when you enter the building, which has free admission on the ground floor: you’ll get to see some amazing murals from the 1930s that were painted for the WPA project.

Pro tip: The early morning scenery here is great, but if you’re serious about photographing SF, you want to be here in time for the observation deck, and it doesn’t open until 10. So I’d time my visit accordingly.

You have many choices. You could go up to Twin peaks, but be careful. It’s an area that’s ripe with crime these days. I preferred the view from up here in the Coit Tower. But the best view of the skyline, hands down is a drive out of the city to Treasure Island, which is in-between San Francisco and the East Bay, off the Bay Bridge. Pro tip: Post sunset from Treasure Island can’t be beat. You’ll get to see the city buildings lit up, which makes for an awesome shot. And you don’t need a big camera to capture it. I got this shot on the iPhone, with the telephoto lens.

On a clear morning you can look down the hill and see Alcatraz Island staring back up at you. Location: you remember it from the cable car shot, right? Hyde and Chestnut. Pro tip: Here I recommend a wide lens, as wide as possible, so if you have super wide on your phone use it.

Nothing screams tourist in SF like this honky-tonk section, but you gotta come. Your establishing shot of the sign is right here at 2820 Taylor street, you can get your cable car shot over at Powell and Mason, or Hyde and Beach, because the lines originate there. The morning sea lions are down the way off Pier 39 and if you come early in the morning, you can get beautiful shots of the boats in the reflective water. Ghiradelli square right down the street. Speaking of Photowalking, if you turn left from here, you can walk all the way, some 4 miles, to the Golden Gate Bridge, through some wonderful San Francisco parks, most notably, Fort Mason. Pro tip: Fisherman’s Wharf is all about early morning shots. The earlier the better. Use your telephoto lens to capture the sea lions.

The crookedest street in the world. It’s hard to get a great perspective on the zaniness of the street on a smartphone, but there are two places to try. Either on the ground looking up, or walk up and look down. Lombard is a normal street except when you get to Hyde and Leavenworth, where it zigs and zags. Pro tip: Lombard starts attracting more crowds and cars as the day gets longer. The road looks more wild when cars are streaming by it, so mid-afternoon works to your advantage.

Another historical remnant from another time has the great clocktower, a wonderful neon sign that screams San Francisco and looks fantastic at night. Pro tip: The Ferry Building is best at nighttime, right around sunset, for the glow of the neon and the city lights. The best place to pick up shots of the building aren’t right in front or by the side, but a pier away, on the left of the building, at Pier 1.

Finally, Who;’s hungry? You may leave your heart here, but you’ll never go hungry. SF is known for sour dough and seafood in Fisherman’s Wharf, Italian pastries in North Beach and dim sum in Chinatown.

Jefferson Graham is a Los Angeles-based writer-photographer, the host of the “Photowalks” travel photography series on YouTube, and co-host of the iPhone Photo Show podcast, a former USA TODAY tech columnist and working photographer. You can find more of Jeff’s work on his website, Facebook, Instagram, YouTube, and Twitter. This article was also published here and shared with permission.

Say Aloha to the Season of Alola in Pokémon GO