Today Adobe announced a plethora of new features and updates across Creative Cloud video and audio tools that improve performance and enhance productivity.

This update also includes performance improvements and workflow refinements in Premiere Pro that will help editors keep their creativity moving. You can find the details regarding all these new updates below. Besides that, display technology optimizations on Windows systems with integrated GPUs will see playback performance improvements ranging from 5 percent to 40 percent across all formats. Color Match is now 30 percent faster, accelerating shot matching workflows, and two more effects are now GPU-accelerated as well. 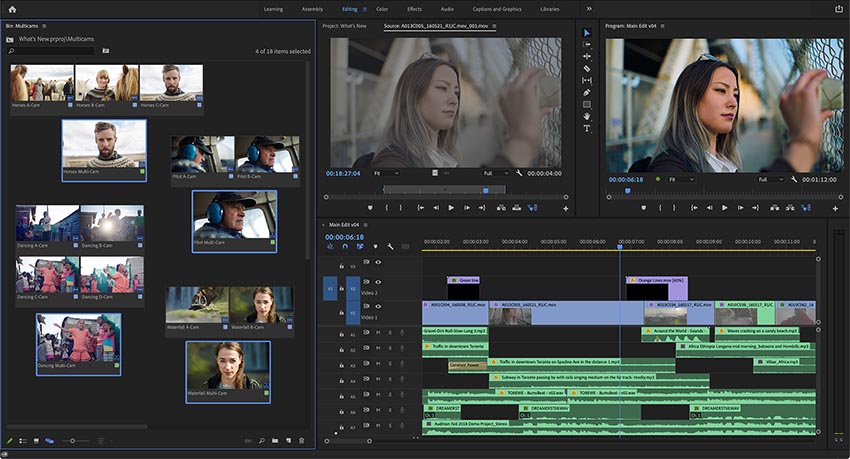 Using the new Text panel, first introduced for the Speech to Text and captions workflow, editors can now search all of the titles and graphics in their sequence and perform global Search and Replace along with spell checking. A new universal text engine makes it easy to work with different languages and scripts, even within the same graphic.

New shape tools, on the other hand, allow editors and creators to add polygons to their graphics with precision controls for sizing and the ability to add and adjust rounded corners. Users who are familiar with the Adobe design tools in applications like Photoshop and Illustrator will feel right at home. Puppet Maker gives creators the tools they need to create, customize, and animate their own characters in Adobe Character Animator. Previously, users had to first build and rig a layered puppet in Photoshop or Illustrator, or use one of the pre-built puppets in Character Animator.

Additionally, Puppet Maker gives users the immediacy of starting in Character Animator and the freedom to design their own character from a variety of styles, without leaving the application. Furthermore, Transcript-based Lip Sync allows animating your character’s mouth movements using written scripts or transcriptions, including transcripts generated with Speech to Text in Premiere Pro.

Last but not least, After Effects now includes the new universal text engine, described above, and the latest version of Cinema 4D Lite with support for the full version of the Maxon Cinema 4D R25. For more information on this release, visit the What’s New pages for Premiere Pro, Character Animator, and After Effects.

How to start using WhatsApp: A simple guide for beginner's