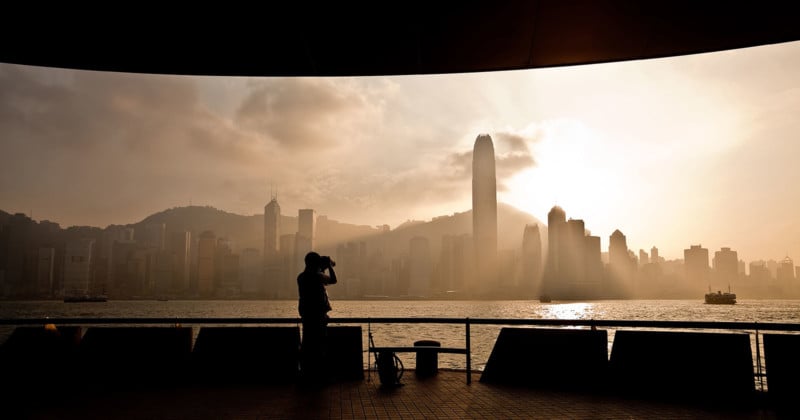 His is an exceptional story. One of learning the art, science, and craft of photography back in the days when there were no digital cameras, no in-built light meters, and no way of knowing if you got a good, in focus, correctly exposed photo, until you took the film and developed it (yourself) in the darkroom. You needed to carry a notebook around, in those days, in which you recorded the aperture, shutter duration, and description of each image, so you could, later, go back and analyze what you did wrong, or right.

He studied photography when there were barriers to entry. When you had to spend years in apprenticeship to a master, in hope that he would deem you worthy of his knowledge, and share it with you. He learned his trade at a time when its secrets were closely held, and every effort was made to keep it that way.

On ‘retirement’ he proceeded to give all that knowledge to literally tens of thousands of students, at Modern School, Barakhamba, and at the Triveni Kala Sangam, both in New Delhi. And that too, practically for free. Between YouTube tutorials, the O.P. Sharmas of the world, and the debut of digital cameras, the barriers to becoming a photographer started disintegrating by the end of the 90s. 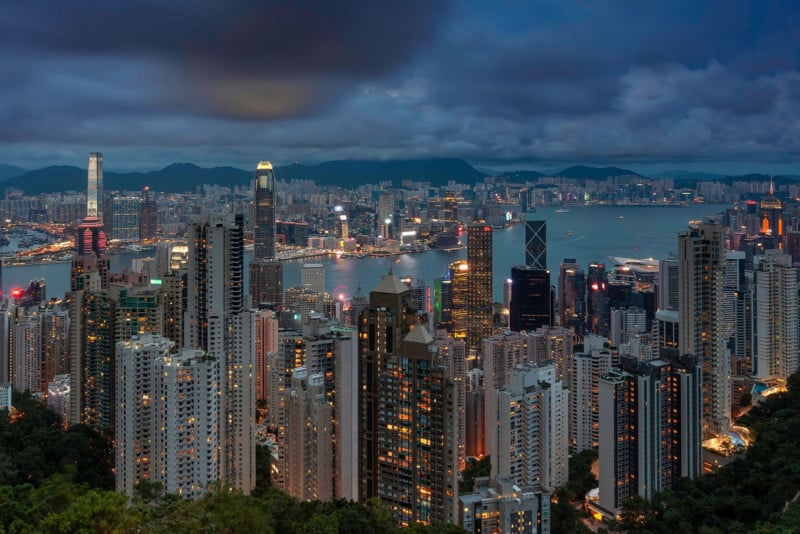 The next wave is coming folks. And with it, photography as a career — as we know it today — will die, and everyone and their mother will be a photographer.

That phase is artificial intelligence.

The AI Revolution in Photography

Already, today, the smartphone in your pocket does most of what I do in Lightroom and Photoshop, in the fraction of a second that it takes to shoot the image. Consider this story:

One evening in Hong Kong, my wife and I were at the Peak. I wanted to make a photograph of Victoria Harbour just around the blue hour, when people were turning on their lights. I knew in my head what I wanted it to look like — I was just waiting for the right light.

While I was doing my thing, Anvita was flitting around, taking photos of me taking photos, and of what I was taking photos of, with her iPhone. So in due course, when the moment came, it was stunning and I got what I wanted. I packed up and we went for dinner. Throughout dinner, I just wanted to get back home because I wanted to edit the images! I was so excited! Finally, a few hours and drinks later, we get home. My wife climbs into bed and I eagerly go to my laptop.

As I pulled the images out of the camera, I could feel my heart racing. I knew I’d captured something beautiful. Once done with my editing, I sat back and just kept looking at the one I’d chosen to work on.

I wanted to show someone. I needed to know that someone other than me thought this was incredible. But everyone was asleep! Then I heard my daughter pulling the door to her room shut. She’d just woken up to go to the bathroom.

I go to her room, she’s all blurry-eyed, half asleep, annoyed that I’m so hyped up and excited.

“Check this out, look at this photograph, isn’t it amazing?”

She’s interested in photography too, and we often share images with each other. I expected something appreciative, positive, from someone whose perspective I respect and appreciate for its honesty and insight.

“What are you getting so excited about,” she mumbled, “it’s two in the morning. Mum posted that picture on the family group three hours ago. I liked it already. Let me sleep.”

I was gobsmacked. Reality check. I looked at the image in the family group, on my phone. It was spectacular.

Now let’s be clear about this. The image out of her cellphone camera was not as good. It looked terrific in the phone, but seen on a large monitor, at full resolution, there was no comparison, whatsoever. In the iPhone photo, there was not as much detail, a lot of noise, and the colors were off. It was blurry in places it shouldn’t be, it was just messy. At full size, or when printed, Andy 1, iPhone 0.

Even commercially, the needs of industry have changed. Much of the erstwhile printed materials have gone online, and a lot of communication and advertising have become digital. These media don’t need huge images. For the most part, they don’t need anything over the resolution of an office laptop monitor, which today, is flirting with 2000 pixels on the long side. Any modern cellphone camera would give you a useable image of that size.

Add to that mix the fact that the AI in the cellphone did in a fraction of a second pretty much what I did over a couple of hours on my own. Okay, so the phone didn’t eat spaghetti and drink a couple of beers, but you catch my drift!

So, point one: with artificial intelligence built into current phones, their speed of processing, and the fact that the photography needs of industry are not as exacting as they were in the past, it means that, in many cases, you don’t need to hire a photographer. Just use your phone. Great photography is great, but for most things today, good photography is just fine.

But what about individual style? Just as Picasso had his own style, and Monet his, so too do the big names in photography have their artistic vision and interpretation that make their work unique.

Ansel Adams, during his days as a photographer for the National Park Service of the US’s Department of the Interior, took some incredible photographs. He devised a system where he would ascribe ‘zones’ to different luminosity levels in the scene and exposed accordingly. He was brilliant in the darkroom as well, dodging and burning selectively, till the image turned out as intended.

One of his most famous photos, called Moonrise, Hernandez, New Mexico is of an almost-full moon, above the town of Hernandez. The moon shines brightly overhead, a layer of clouds lies between it and the town, which is bathed in the soft light of the sun setting in the distance. The steel crosses in a graveyard glow in this reflected light.

It’s really quite stunning… and almost didn’t happen – he couldn’t find his light meter. But he knew the luminosity of the moon, and knew what zone he wanted it to be in, so with that information was able to calculate the exposure time of the entire scene.

These were the days of those massive box cameras, with the manual shutters and the big black curtain under which the photographer would disappear. So he sticks in his unexposed negative and makes the exposure. There were no dual SD cards back then, so the standard backup technique was to take a second exposure. But by the time he got his second negative prepped, the sun was gone, and he couldn’t take the backup.

The rest is history, and we celebrate the genius of the man.

But back up a bit. He calculated his exposure because he knew the luminosity of the moon? WT absolute F?

What complete mastery of your field must you have to be able to do that? I don’t think there’s a photographer alive who could do that on the fly. That is what a lifetime of experience is. That is raw, unadulterated genius. You can’t get that off a YouTube video.

But you can buy a plugin for it.

Yes. You can buy a plugin for Photoshop that lets you define your zones and will then expose the scene as Ansel Adams would have done.

Point two: artificial intelligence can recreate the photography styles of individuals, can simulate different lighting, cameras, lenses, and can even create its own styles.

Why “Real” Cameras Have a Natural Advantage

Now, the thing is, a cellphone will never be able to make better photographs than a real camera, because, ultimately, the thing that is its greatest feature, is what limits it. Size.

The quality of a camera is directly proportional to the size of its sensor. This is the “retina” of the camera, the part of the camera that receives the light data being focused from the lens. A bigger sensor means more information from the same amount of light is captured, so it will have more realistic colors, less noise, greater dynamic range, and all those lovely things.

The size of the sensor on your phone is about the size of a fingernail. On a full-frame camera, it’s defined as a rectangle with a 35mm diagonal. So a cellphone, in the long run, cannot compete with a camera.

AI is Coming to a Camera Near You

I recently upgraded from a Canon 5D Mark II DSLR to a Canon R5 mirrorless camera. 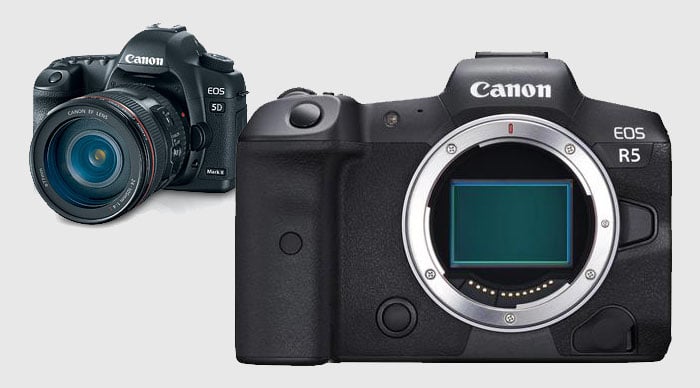 In the R5, I can set the autofocus to latch onto my subject’s eye, and track the eye as the subject moves. So if your kid is running across the park, the R5 will focus on his eye, and keep the focus there as he bobs and weaves around other kids, and park benches. If he turns his head slightly, and the other eye is closer to the camera, it knows to switch focus to that eye.

If my daughter is running with my dog, I can specify whether I want the camera to look for her eye or my dog’s (or any animal). The camera knows how to tell them apart.

In a recent firmware (the software that powers the camera, the brains) update, Canon added vehicle tracking as part of the autofocus system. So I can choose “vehicle” from my menu, choose which vehicle, and the camera will ensure the focus stays on that particular vehicle.

Artificial intelligence is making its way into your camera.

It is only a matter of time when all that AI that is in your phone will also be in your camera. Want that amazing shot from the Peak? Take your shot, and then take the time to enjoy the spaghetti and beer with the company of your wife. Hey, take time for a cigar too — you’ve already got your shot and uploaded it to the family group. For good measure, you also put it on Instagram and send it to the print bureau, all from your camera.

Come to think of it, that shot from the peak would look amazing in Ansel Adams’ style. You can just do that from the back of the camera.

It’s happening. The professional photographer as we know him or her today is going the way of the dinosaur. Prepare yourselves, guys. Figure out what makes you different, what makes you unique. Find what cannot be replicated by technology — what makes you, you? Build your business around that. Because already everyone and their mother is a photographer.

The opinions expressed in this article are solely those of the author.

About the author: Andy Malhan is a portrait and communications photographer based in Hong Kong. You can find more of his work on his website, blog, Twitter, and Instagram. This article was also published here.

Image credits: Header photo licensed from Depositphotos, and all other photos by Andy Malhan.