The much-awaited Oppo Reno 7 Pro smartphone’s launch in India is right around the corner, according to a fresh leak. Oppo’s upcoming Reno 7 Pro smartphone’s Indian variant has been subject to several leaks lately. To recall, the series went official in China back in 2021 and now is reportedly headed to India. Not too long ago, Oppo revealed the Reno 7 series launch date via a tweet. Now, the Chinese consumer electronics company is building more hype surrounding the series’ launch by unveiling the Reno 7 Pro specifications in a press release.

According to the press release, Oppo has teamed up with MediaTek for the customization of its Dimensity 1200 SoC. Aside from that, the collaboration will enable the brand to offer an improved version dubbed the Dimensity 1200 MAX for its Reno 7 Pro smartphone. The Chinese smartphone manufacturer also claims that the upgraded chipset will bring a myriad of improvements. For instance, it will offer better display, clearer videos, and improved imaging capabilities. Now, let’s check out what the Oppo Reno 7 Pro will offer in terms of specs and features.

Upfront, the Reno 7 Pro will sport a mammoth 6.55-inch AMOLED display that delivers a refresh rate of 90Hz. Moreover, it has a layer of Corning Gorilla Glass 5 on top for additional protection. Under the hood, the phone packs a MediaTek Dimensity 1200 MAX processor. Also, the handset could ship with 12GB of RAM and offer 256GB of onboard storage capacity. In addition to that, the Reno 7 Pro has up to 7GB of virtual storage that serves as RAM. The Dimension 1200 MAX is capable of achieving up to 5100Mbps peak downlink and uplink speeds of 700Mbps. 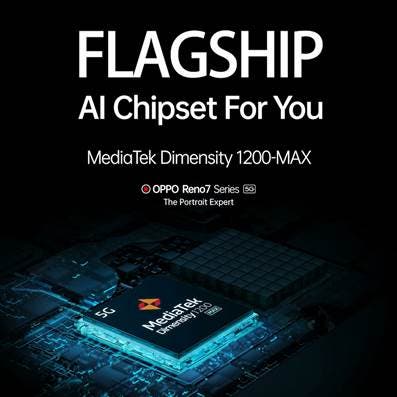 Moreover, the chipset features 3GHz Arm Cortex-A78. A 4,500mAh battery with supports 65W SuperVOOC fast-charging will be powering up the entire system. This aligns with the phone’s 3C listing that hints at 65W fast charging support. According to Oppo, the battery takes only 31 minutes to fully charge the phone. On top of that, the technology ensures that the phone does not get too hot during gaming when it is plugged in. Furthermore, the phone runs Android 12 OS out of the box with a layer of ColorOS 12 on top. For optics, the Reno 7 Pro houses three rear-mounted cameras at the back. These include a 50MP main camera, an 8MP ultrawide lens, and a 2MP macro lens.

The Oppo Reno 7 Pro will reportedly come with a 32MP front shooter for capturing selfies and video calling. Moreover, the device adopts an AI Deblur technology which reduces the face blurring effect in portrait mode caused due to handshaking. Aside from that, the tech improves color as well as contrast in HDR quality videos.

The Oppo Reno 7 Pro is set to launch in India on February 4. Moreover, it will be available in Gold, Black, and Blue color options in the country. According to Sudhanshu Ambhore, the Oppo Reno 7 Pro 5G could retail for INR 39,990 for the 12GB RAM+ 256GB storage variant. This pricing does not coincide with the price mentioned in a retailer’s listing spotted by Passionate Geekz. While Ambhore claims that the Reno 7 5G will retail for INR 29,990 in India, the retailer’s listing suggests that the same 8GB RAM+128GB storage model will sell for INR 31,490.

Lastly, the Reno 7 Pro will reportedly go on sale via Flipkart, as well as the company’s official online store.

Digimon: Survive Release Date & What We Know So Far