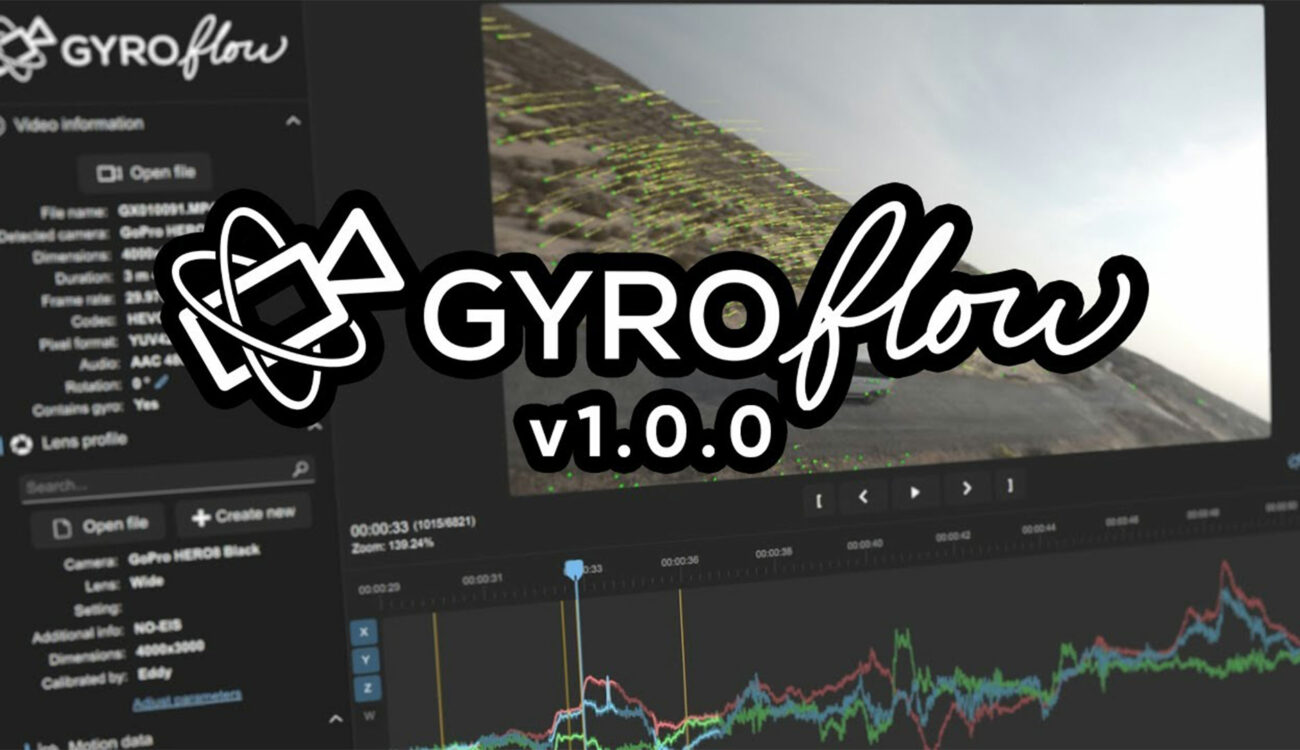 Gyroflow is an open-source post-processing video stabilization software based on logged motion data. Available free of charge for both Windows and macOS, Gyroflow supports many camera models from Sony, Insta360, and GoPro and it can stabilize footage even with Hypersmooth baked-in.

When it comes to stabilizing video footage, there are basically two different approaches, the main difference being where the stabilization happens. It can either be done directly in-camera (or lens, or both), electronically or mechanically, or it can be done in post-production. When stabilizing recorded footage in post-production, the basic workflow is analyzing the image, guessing which movement is unwanted, and then compensating for it. Another (better) way of stabilization in post-production is using gyroscopic data so that the computer knows how the camera was moving and which movement would, therefore, be unwanted.

Two examples of existing popular software that can utilize gyroscopic data to stabilize footage would be the ReelSteady which is owned by GoPro, and the Catalyst Browse which only works with compatible Sony cameras that provide gyro data. Apart from these two, there is an open-source tool called Gyroflow which got a new update recently. Let’s take a look at the Gyroflow v1.0.0.

Gyroflow is an open-source post-processing video stabilization software based on logged motion data. With the help of precise lens calibrations, rolling shutter correction, and tweakable stabilization algorithms (including horizon leveling), the app can produce gimbal-like stabilization with no or minimal weight penalty. It also works regardless of lighting conditions or moving subjects.

It is especially suited for FPV aerial videography. With supported cameras that record gyro data (see below), there is no additional hardware required. Interestingly, a small camera with gyro data (such as GoPro) can even be used as a logger for any other camera. It only needs to be rolling and, of course, be fixed to the desired camera. To me, this sounds really interesting!

Some highlights of the new update to v1.0.0

The app offers a real-time preview, parameters adjustments and all calculations, and a visual display of smoothed quaternions. It also has adaptive zoom (dynamic cropping) which should give better options than ReelSteady. Gyroflow is based on a telemetry-parser that supports all gyro sources out of the box. Some more Gyroflow features include:

Unlike ReelSteady, the Gyroflow app is open-source and is available for download, free of charge. You can, however, donate to its creators (via PayPal or Patreon) to support the project. For general support, discussion, and user feedback, the Gyroflow community including the developers is active on this Discord server. The good news is that the app works for both Windows and macOS (including Apple Silicon machines).

Do you use ReelSteady or any other app to stabilize your footage in post-production? What do you think about the Gyroflow project? Let us know in the comments section underneath the article.