Does DJI See “Red”? – Ronin 4D Will NOT Have ProRes RAW Initially 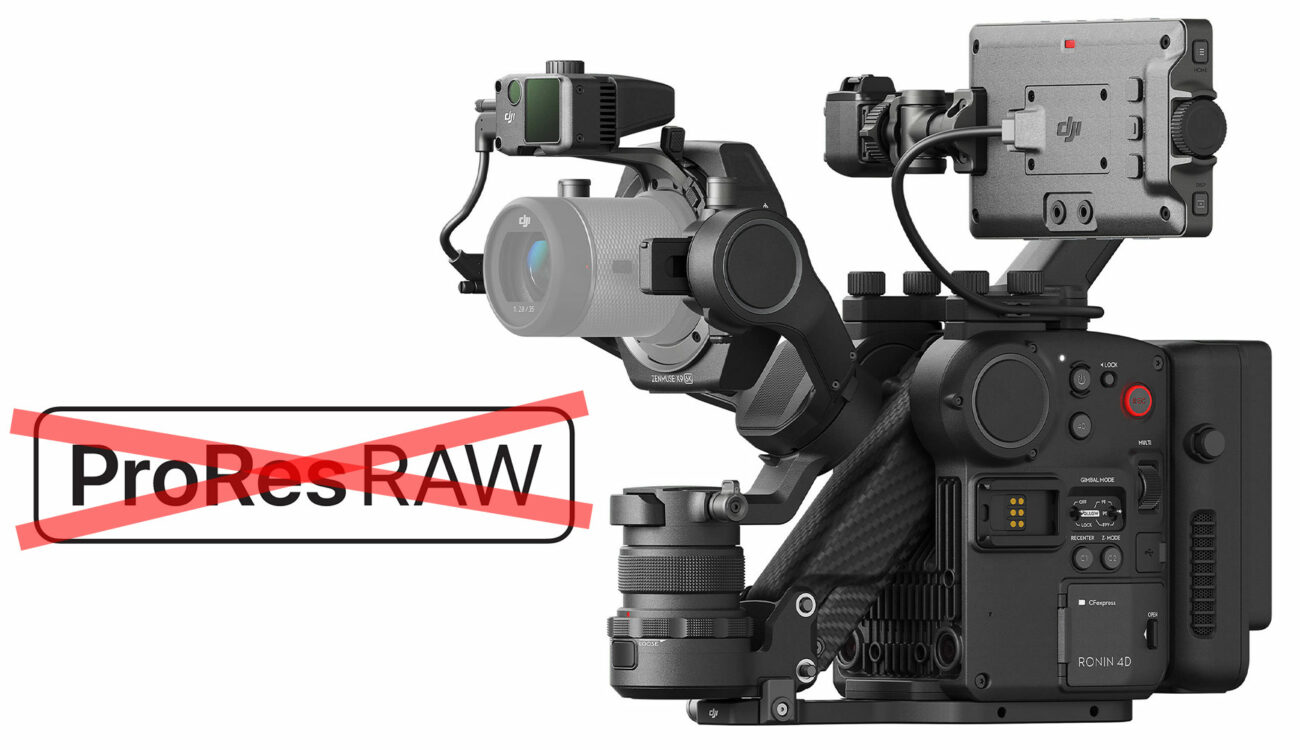 In a tweet from earlier today, DJI published a specifications update for the Ronin 4D. The company says that unlike previously reported (and unlike reviewed by us, using ProRes RAW) the camera system will not have the internal ProRes RAW recording capability at launch. Instead, DJI will add ProRes 4444 XQ with a future firmware update later in 2022 and they lowered the price for the Ronin 4D-6K to $6,799.

Only two days ago we informed you about the two upcoming firmware updates for the DJI Ronin 4D (check our review and lab test). The unique 4-axis stabilized camera system from the Chinese tech giant was introduced in October last year, but DJI seemed to have delayed the shipping of pre-ordered units. The first units of the DJI Ronin 4D with the Zenmuse X9-6K should be starting to ship in the coming days, but there seems to be some bad news coming: The Ronin 4D will not have the internal ProRes RAW recording.

The internal ProRes RAW recording capability was among the most anticipated features of the system, but now it seems DJI will not be able to offer it as part of the Ronin 4D package. Today, DJI released a tweet labeled “Global Release and Specifications Update”. The company says that the Ronin 4D-6K units will start shipping on February 16, 2022.

The lack of ProRes RAW is a disappointment, but let’s look take a closer look at the good news first.

DJI further says that the first firmware update for the Ronin 4D (mentioned in this article) will be available at launch, so it should be downloadable from February 16, 2022. The update will allow the High-Bright remote monitor to view and control the main monitor interface with Mirror Control Mode, allow a clean video stream over HDMI and SDI ports on the remote monitor expansion plate, and support automatic calibration for some third-party auto lenses to realize LiDAR focusing system functions. That’s amazing news as in practice this should mean that even third-party E-mount lenses will be able to be used “as is” without calibration and still use their autofocus.

No ProRes RAW for Ronin 4D at launch

Now the worrying part comes – DJI says that Ronin 4D will not support internal compressed raw (Apple ProRes RAW) recording at launch. Interestingly, DJI added the words “at launch” to the sentence. Does this mean that it might be added with a future firmware update one day? At the moment we can only speculate what the exact reason for this is. The most likely scenario to me is that whatever kind of deal DJI had with RED Digital Cinema (the owner of the compressed raw recording patent) got complicated or canceled (we reported about Apple’s failed challenge to the patent before). It is unfortunate as I can imagine many people who preordered the Ronin 4D were looking forward to recording compressed raw in-camera.

Lower price and ProRes 4444 XQ instead

DJI further said that they will add Apple ProRes 4444 XQ recording to the Ronin 4D with a future firmware update later in 2022. This codec unfortunately does not offer such an appealing quality/file-size ratio as the much newer ProRes RAW. ProRes 4444 XQ is much larger.

To reflect this change in specifications, the list price of the Ronin 4D with the Zenmuse X9-6K is being lowered to $6,799. DJI says that all customers who pre-ordered the camera at the original price should contact the dealer to receive a refund of the price difference (approximately $400).

Did you pre-ordered DJI Ronin 4D? Is the absence of internal ProRes RAW a deal-breaker for you or not? Let us know in the comments section underneath the article.