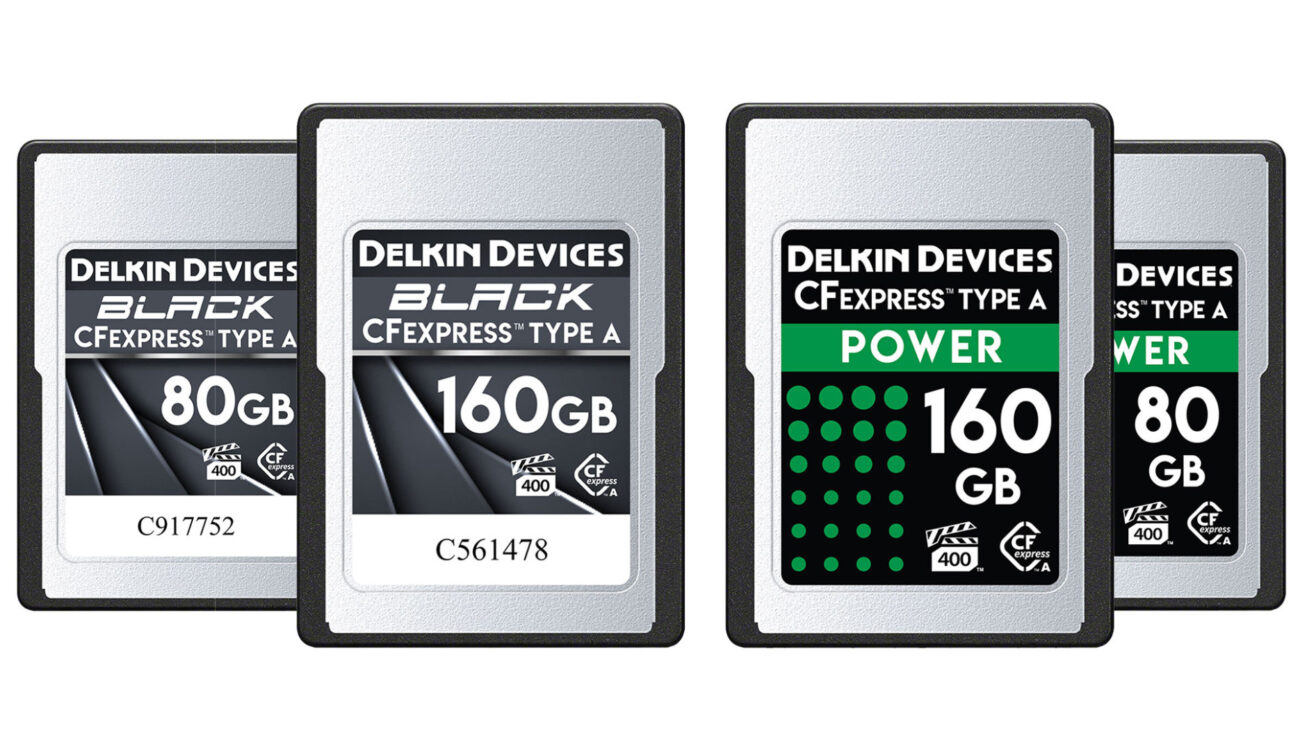 The new Delkin Devices CFexpress Type A cards come in two sizes, 80GB and 160GB, and they reach a maximum write speed of 790 MB/s (730 MB/s for 80GB) and a maximum read speed of 880 MB/s. The BLACK series cards additionally include Delkin’s 48-hour replacement guarantee. The company also released a new USB-C 3.2 card reader that also has an extra SD UHS-II interface. The Type A cards can now be pre-ordered starting at $184.99.

When it comes to media, it seems that CFexpress is the memory card format of the future. More and more cameras support it and additional companies are starting to offer it as well. The price is still relatively high, but with higher capacities, CFexpress cards are actually already more affordable than V90 SD cards. Moreover, the prices for CFexpress cards are expected to slowly decrease in the future as the standard becomes more and more used.

The new Delkin Devices CFexpress Type A cards use the 3rd generation PCI express interface and can reach write speeds of up to 790 MB/s (730 MB/s for 80GB). The read speed for footage offload can reach up to 880 MB/s. All the cards are durably designed to be shockproof, magnet proof, X-ray proof, anti-static, UV-guarded, and resistant to extreme temperatures.

Delkin Devices offer two types of cards in two different capacities – BLACK series 80GB and 160GB as well as POWER series 80GB and 160GB. The only difference between these series is that BLACK cards include Delkin’s 48-hour replacement guarantee. Delkin claims they will happily replace any non-working card within 48 hours or less (not including weekends), prior to receiving your non-working card. You can also replace your card over the counter at any authorized Delkin reseller.

On top of that, all Delkin Devices cards are backed by a lifetime warranty and Delkin’s American-based customer support team out of San Diego, CA.

To accompany the new cards, Delkin Devices released a new memory card reader. It uses a USB 3.2 Gen 2 Type-C interface (speeds up to 10 Gb/s) so it should not create a bottleneck for quick footage offload with any card. The card reader comes in two versions – one for Type A cards and one for CFexpress Type B cards. Each version also features an extra SD UHS-II card slot on the side.

Only Sony cameras for now

CFexpress Type A or Type B?

In my opinion, the CFexpress Type B is currently a better choice for camera manufacturers and filmmakers because the cards are able to offer higher capacity and better price-per-GB. While the largest Type A card on the market currently has 160GB, Type B cards go as large as 4TB already. It is cool that Type A cards keep the size at an absolute minimum, but I think Type B cards are not that large either and it should be possible to even offer dual Type B slots in relatively small mirrorless bodies in my opinion.

I agree, however, that the advantage of Type A cards is the combined card slot so that users have the ability to use more affordable SD cards when fast write speeds are not necessary. At the same time, there can be dual combined slots in the camera and not one SD and one CFexpress Type B. What is your opinion on this? Let us know in the comment section!

Do you use CFexpress Type A cards in your cameras? Would you rather have a Type B card slot? What do you think about the new Delkin Devices cards? Let us know in the comments section underneath the article.