Canon China is much more active on social media than in many other regions. Its Weibo account this morning published a teaser (Chinese) featuring a large, gold number three, and writing that states, “The new friend you’ve been waiting for is finally here; see you here in three days.”

A QR code at the bottom leads to a live event site showing a countdown to February 24 at 7 p.m. local time, seemingly suggesting a product launch. 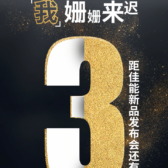 Commenters on Canon’s Chinese social media feeds do not appear to have any earlier references, and are using (much as English-speaking comment boards tend to do) the open-ended teaser as a bit of a Rorschach test of personal hopes and desires. An R7 and an RP II have been speculated, but then so have some pretty crazy ideas, like a 5D Mark V.

here is the design and specs