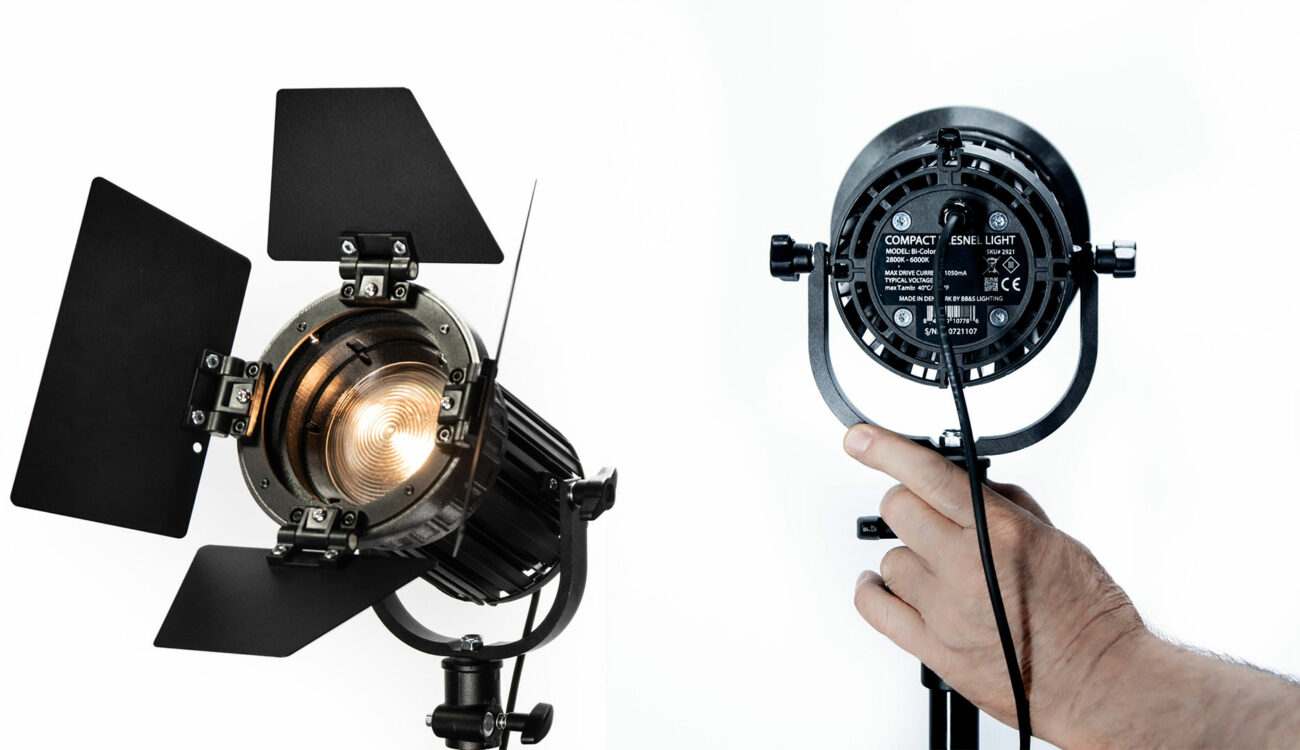 If you’re in the market for a very compact (5.5in/14cm long) and lightweight yet proper fresnel bi-color LED light, look no further: the BB&S Compact Bicolor Fresnel (CFL) light might be the right choice for you. This 38W LED light can go from 2700 to 5600K with a TLCI of 96, and you can focus it from 12 to 52 degrees. So let’s take a closer look at it!

With time and technology, LED lights are getting smaller, which is good news for one-man-band filmmakers that want to simplify their kit and bring fewer bags/less weight on set. It makes us more mobile, faster to react, and it makes our lives easier.

However, one thing you don’t want to sacrifice is light quality. Compact LED fixtures usually feature a COB chip like the Aputure Amaran COB 60d/60x, but they miss focusing capabilities without extra light modifiers. Of course, there are other choices like the Aputure LS 60d/60x, but these are not true fresnel LED lights; they are “just” focusable.

If you miss the ARRI 300W/650W tungsten fresnel in your kit, don’t worry, as BB&S recently released the Compact Bicolor Fresnel, one of the most miniature LED fresnel lights on the market.

As its name suggests, the BB&S Compact Bicolor Fresnel is a bi-color LED light that can go from 2700K to 5600K. According to the company, it draws only 38W and can output over 2400 lumens with a TLCI of 96. Of course, you’ll have to take these numbers with a pinch of salt as the output beam fades from 100% (center) to 50% (edges).

At the front of the fixture, you’ll find a 90mm curved glass Fresnel lens. With the front ring, you can adjust the beam angle from 11° (spot) to 52° (flood) while maintaining the same footprint and light quality, as the glass element does not move, only the LED chip inside does.

The BB&S CFL is a compact fixture with a length of only 5.5in/14cm for a weight of 3.5lbs/1.6kg. It is entirely made out of metal, which helps with heat dissipation. On top of that, the BB&S CFL is silent as there is no fan inside.

At the back of the BB&S Compact Bicolor Fresnel, you’ll find a 2-meter built-in cable with a 4-pin XLR male connector. Unfortunately, you got it, the fixture doesn’t come with the 65W PSU ($95) nor the 40W Driver/Dimmer with D-Tap cable ($395) for battery operation.

The same goes for wireless/DMX connectivity: you’ll need to get yourself the BB&S 4-Way Controller to provide DMX 512/RDM to two fixtures simultaneously.

The BB&S Compact Bicolor Fresnel is available now for $650.

As you can tell, once you start adding all the extra bits, it is an expensive LED Fresnel light, but still less costly than a Dedolight DLED7 bi-color LED light that retails for close to $1600. Furthermore, if you still have an ARRI 300/650W fresnel, the VisionSmith ReLamp system might be worth a look!

What do you think about this new BB&S CFL LED light? Do you believe focusable LED lights are on-par with traditional fresnel fixtures? Don’t hesitate to let us know in the comments down below!

Virus on your System? Here's what to do next.