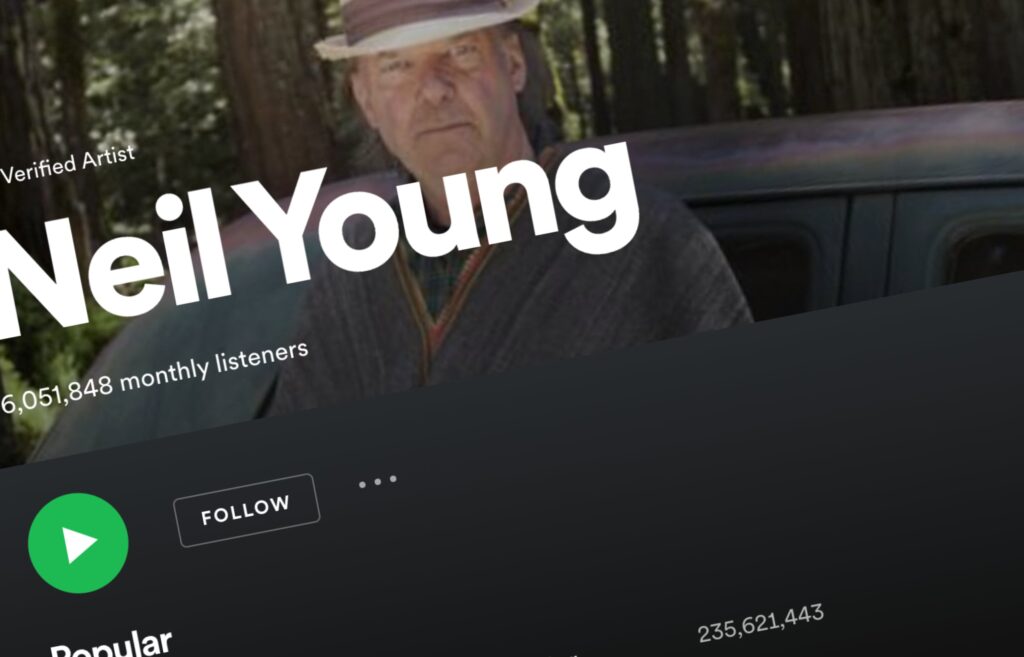 OPINION: Spotify’s force-feeding of podcasts was once a tolerable annoyance. Now they’re come at the direct expense of music. And my patience is all but exhausted.

In case you hadn’t noticed, Spotify isn’t realty a music-focused streaming platform anymore. Of course, music is a big part of its offering, but perhaps not the most important part. That would be podcasts and, more pertinently, the money it can make from serving targeted ads in podcasts.

It came to a head this week when Spotify swiftly removed Neil Young’s music – albeit at his own request – over his moral objection to perceived Covid vaccine misinformation on the Spotify-exclusive Joe Rogan Experience (JRE) podcast. Young said ‘it’s me or Rogan’. Spotify’s chose its prize pig.

This wasn’t a surprise. Spotify invested £100 million in The Joe Rogan Experience, for better or worse, with the idea of creating an empire around a podcast advertising network. It wasn’t about to enter a free-speech vs censorship of misinformation debate. The company knew what it was getting when it signed Rogan up.

For me, comparing the respective contributions of Young and Joe Rogan is like comparing Martin Luther King with Nigel Farage. However, the politics of this aren’t what I’m here to talk about. Before, Spotify’s relentless force-feeding of Podcasts was an obstacle impeding my ability to enjoy music. Now, it’s coming at the direct expense of an artists’ library actually leaving the platform. The stakes have risen.

The way Young was dismissed, apparently without the effort for mediation and a concession that a clear and public content policy might be necessary (the company says it has a “detailed” one and I’ve asked for it, because I sure as hell can’t find it), showcases a lack of reverence for artists and musicians.

It goes beyond arguments about the perennially-poor per-play streaming rates (a pittance that only really benefits larger artists with many millions of plays) and tells you everything you know about where music ranks in Spotify’s list of priorities.

If you’re in any doubt, look no further than the continued absence of Spotify HiFi from the proposition. Just where is it exactly? Since Spotify announced Lossless support more than 11 months ago, Apple both announced it enacted it (and Spatial Audio). Deezer has it, Amazon has it, Tidal has it.

Spotify, the music streaming trailblazer who changed the way we listen, is now bottom of the pile when it comes to the available audio quality. As far as we know Spotify HiFi isn’t imminent. Why isn’t this a priority given the advances rivals are making? Simply, because Spotify has bigger ones.

To be honest, the shoehorning and over-promotion of podcasts within the main Spotify app has bothered me since day one. It doesn’t take blowhard like Rogan on my homepage for it to get on my nerves.

I didn’t ask for these podcasts and don’t pay my Premium subscription for them – despite Spotify increasing fees to pay for “more content” like the $30m ‘Harry & Meghan’ podcasts that haven’t materialised. At the very least I should be able to opt out of seeing all podcasts, just like I blocked Oasis from appearing in playlists.

Spotify has spent more than a decade consuming our listening habits and forming algorithms designed to present exactly what we want to hear on Release Radar, Discover Weekly, Daily Mixes and the recommended albums. It knows what we want, so take the hint.

Why not just cancel, you moaning git? You might ask. Well, that’s on me. The company still has me over a barrel. I don’t yet have the strength of one of my peers to cancel my subscription completely – either over the content of the podcasts in Dan’s case, or their presence in general.

Spotify knows me well. I value that knowledge. I’d really, really miss Spotify’s music discovery features and on-point surfacing of my favourite albums, playlists and artists, not to mentioned the unrivalled Spotify Wrapped.

I’m not a massive fan of Apple Music’s UI and Tidal has never grabbed me. But the balance has shifted. I don’t want to listen to podcasts here, regardless of the nature of the content. I want to pay for music and soon enough that cash will be going elsewhere.

The Battle for Uber begins in the trailer for Super Pumped