Samsung Galaxy A53 5G passes by Geekbench, FCC and NBTC, launch is imminent


Samsung unveiled its Galaxy A52 and A72 in March last year, so their successors are pretty much expected for the next month. As a result, the first leaks about these devices are leaking everywhere with the Galaxy A53 5G, in special, being the target of the most recent leaks. The Galaxy A53 5G was recently spotted on the Geekbench benchmark database. It also passed by the 3C certification hinting at a launch in China. Now, the device has been certified by the NBTC and FCC certifications. With many certification steps cleared, it’s safe to assume this device’s launch is something really imminent.

The latest listing also confirms the Galaxy A53 5G will pack model number SM-A536E / DS model number. Back in the last week, the handset was also spotted on the Bluetooth SIG and HTML5 Test databases. Again, the fact that the device is passing through so many certifications and testing authorities, makes us think that Samsung is giving the last steps before the device’s release. Apparently, this time around, we have only a 5G version.

The FCC listing reveals that the handset will have 5G connectivity and NFC. So it’s safe to assume that the device will be Samsung Pay ready at launch. The listing also confirms a charging adapter with model number EP-TA800. This is a 25W charger, the exact same charging capability as the flagship Galaxy S22. That’s not a big surprise, after all, with the Galaxy S22 flagship not going beyond this mark, we can expect Samsung mid-range phones to do anything better. The big difference is that, unlike the flagships, the mid-range smartphone will probably bring a 25W fast-charging adapter in the box.

The Galaxy A53 5G had some of its details revealed by OnLeaks through design renders. The handset will flaunt a 6.46-inch AMOLED display with a Full HD+ resolution and 120 Hz refresh rate. The device will offer an optical in-display fingerprint scanner, just like its predecessor. 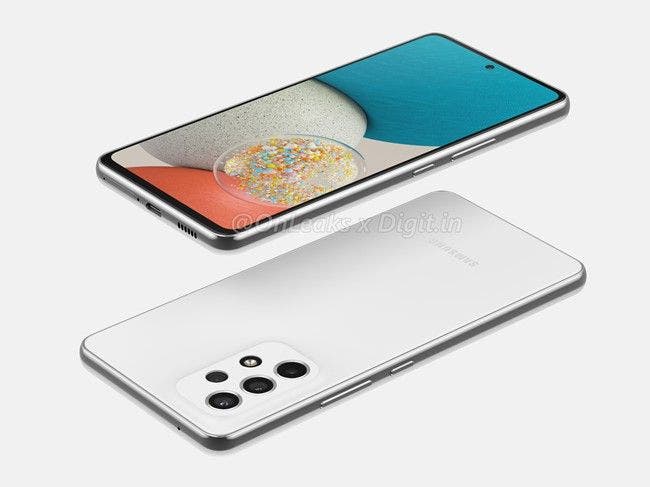 Interestingly, Geekbench confirms an Octa-Core processor which is the Exynos 1200. That certainly is something that the Anti-Exynos gang won’t appreciate. However, Samsung decided to give it some of its premium offerings in the Exynos range. The device has a Mali-G68 GPU and will draw its powers from a 4,860 mAh battery. We expect variants with up to 8 GB of RAM and 256 GB of Internal Storage.

In terms of optics, the device will stick with a Quad-Camera setup. The main camera will be a 64 MP snapper, and we expect the other sensors to be ultrawide, macro, and depth modules. For selfies and video calls, there will be a 12 MP punch-hole camera.

Samsung Galaxy Tab S8: Everything we know so far