Home » Mobile » How to watch NFL Conference Championships in the UK: Bengals vs Chiefs, 49ers vs Rams
Mobile

How to watch NFL Conference Championships in the UK: Bengals vs Chiefs, 49ers vs Rams 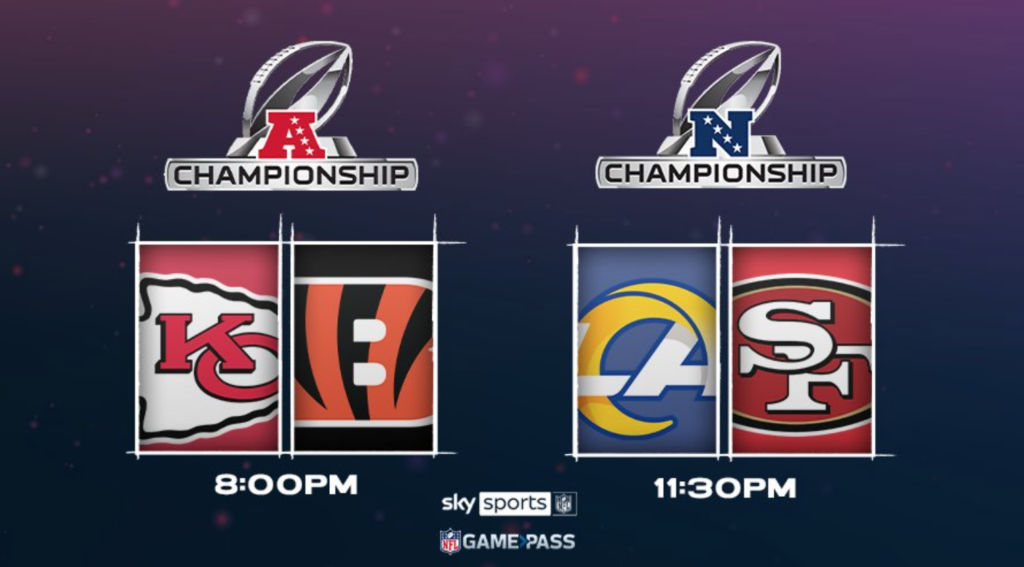 After perhaps the most exhilarating weekend of NFL Playoff action in history, only four teams are left in the NFL Playoffs. In the AFC, the Kansas City Chiefs edged out the Buffalo Bills in one of the greatest games ever, while the Cincinnati Bengals took down the much-fancied Tennessee Titans.

In the NFC, Tom Brady’s Tampa Buccaneers succumbed to Matt Stafford and the LA Rams, while the Green Bay Packers’ Super Bowl tilt ended in the snow at the hands of the San Francisco 49ers.

This Sunday the final four square off it’s the AFC and NFC Championship games with the victors going to the big game next month.

The weekend’s games are as follows:

Here’s how to watch the NFL playoffs, perhaps on that best new TV you got for Christmas.

Here are when the four NFL Playoff games will get underway on Sunday:

How to watch the NFL Playoffs

Sky Sports has the rights to live coverage of the NFL in the UK. On Saturday January 22, coverage starts at 9:00pm on Sky Sports Main Event and Sky Sports NFL and will continue through both games.

You’ll need a Sky Sports subscription of sorts to watch the games. If you don’t have a standard sub’ through the satellite dish or cable platform, you can watch online via the Now streaming platform. You can buy day, week or month-long passes at Now TV, with mobile passes also available.

When you’re watching content online, it’s a good idea to boost your privacy by using a VPN to mask your IP address from would-be wrongdoers. You can read our guide to the best VPNs before streaming the live sport online. Also, here’s our guide to watching the Premier League in 4K HDR this season.