Apple has been offering a three-month free trial to first-time Apple Music subscribers since its launch in 2015. However, recently, Apple’s freebie (trial policy for the service) is now shorter. According to reports, starting this week, Apple Music is offering shorter trial periods for first-time subscribers in the U.S., Canada, Australia, the U.K., and other countries. At present, Apple Music in China has followed up and only provides a one-month free trial period. 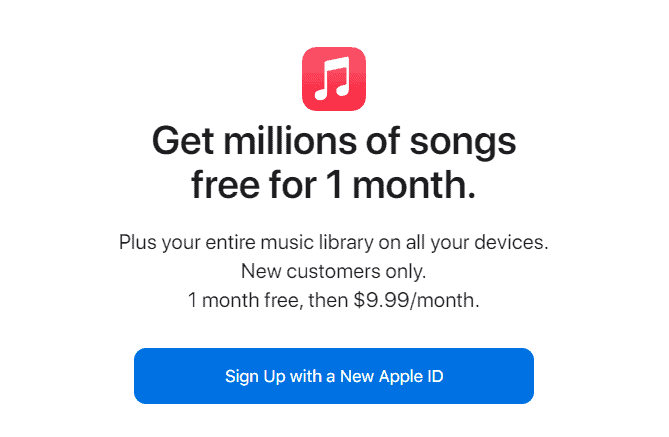 Additionally, Apple Music pricing remains the same. After the trial period ends, users will have to pay $9.9 or it’s equivalent each month. For comparison, Apple Music rival, Spotify typically offers a one-month trial for the premium version of its streaming service. There are occasional two-month trials as limited-time promotions. It also offers a three-month free trial for users who sign up for special channels. In addition, Apple will still offer a 6-month free trial for customers of eligible AirPods, Beats, or HomePod models.

Apple did not reveal why it shortened the trial period

As of now, there is no information as to why Apple had to shorten the trial period. Of course, we will probably never know the reason for its decision. However, it is obvious that one-month free is better for the company than three months free. Recall that Apple did not initially pay royalties for the music that users stream. However, after the letter from Taylor Swift that criticizes Apple, the company now pays. Thus, shortening the trial period will give Apple more months to get back the costs from new users.

Apple Music boasts of a massive library with over 90 million songs. Apple Music no longer focuses on exclusive (or timed-exclusive) album launches. Back in 2017, former Apple executive Jimmy Iovine admitted that “The labels don’t seem to like it”. Standard-quality Apple Music tracks are 256 kbps AAC files, the same format as iTunes tracks.

One attractive feature of Apple Music is the “lossless” feature. With this feature, it offers a couple of streaming options which are mainly for streaming high-resolution music. Users can have access to “CD-quality” 16-bit/44.1kHz up to 24-bit/192kHz. The latter supports true Hi-Res Audio. This means that users do not need a good pair of headphones to fully enjoy this quality. However, it is important to note that the quality of headphones and speakers makes a significant difference when using the standard resolution. Of course, we know that the lossless option is not compatible with all headphones. The wireless AirPods, even the AirPods Max does not support the lossless option.